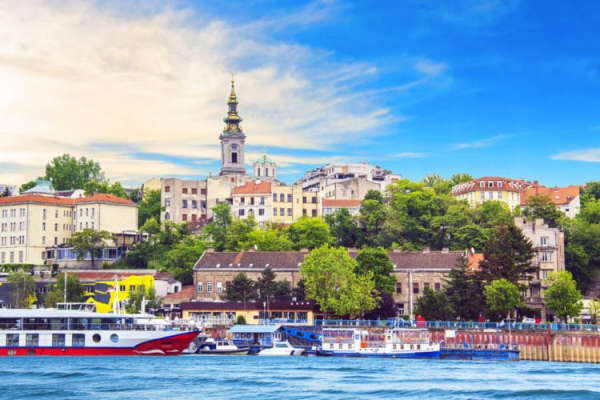 Throughout its history, this city was bombed 40 times. Therefore, it is not surprising that many sights in Belgrade bear the echoes of destructive ups and downs. Settled at the crossroads of the Danube and the Sava, it does not frighten off guests with traces of bombardments, but rather attracts with avenues and parks, large-scale temples and skyscrapers flowing upwards, ancient walls and majestic palaces.

Thanks to the hospitality of local residents, who always They will tell you what to see in Belgrade, there is always an atmosphere of goodwill and cordiality.

What to see in Belgrade in the first place

You won’t have to think for a long time where to go in Belgrade. Everywhere the eye stops at interesting places and objects.

The place-founder of the city, divided into 2 parts. The area of ​​the Upper and Lower parts is full of ancient monuments. All-knowing guides in Belgrade will show you the ruins of a Byzantine castle, the remains of settlements, churches, artillery platforms as a reminder of the original function of the fortress.

Representing a cultural and historical complex, the park is located near the fortress. A tourist train runs around the territory, allowing you to look at the best sights of Belgrade without fatigue and loss of time: a zoo, a military museum, a game park, an art pavilion, sports grounds. 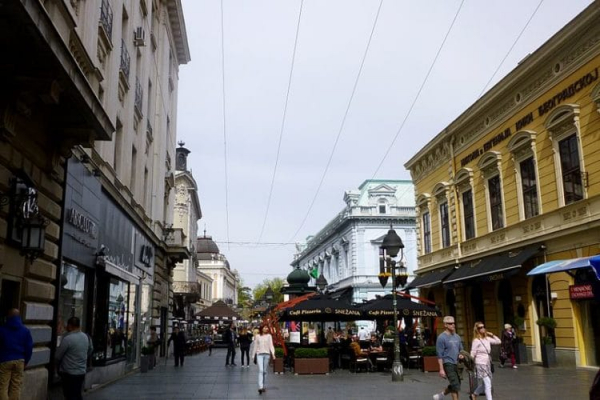 If we list the main attractions of Belgrade briefly, then this street cannot be ignored. From acquaintance with it, the main pedestrian street of the city, the study of the city begins. It is here that the local atmosphere is transmitted in full force. Walking along it, you involuntarily admire the slender architectural ensemble, consisting of buildings built in the 70s of the XIX century. The eye is attracted by a slender male figure on a horse, made of bronze – a monument to Prince Michael. 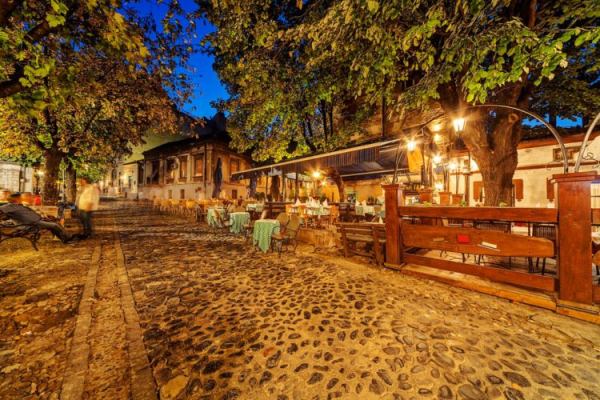 Short Skadar Street (only 590 meters) in the evening

This place can be safely attributed to the sights of Serbia, it is so colorful. Once gypsy artisans settled here, today it is called the bohemia quarter. From everywhere you are invited to taste the cuisine of restaurants and cafes, while the invitations do not contain obtrusiveness and lack of culture. Music, walls of houses painted with pictures and a characteristic cobblestone pavement create the atmosphere of an idle pleasant rest in the best possible way. 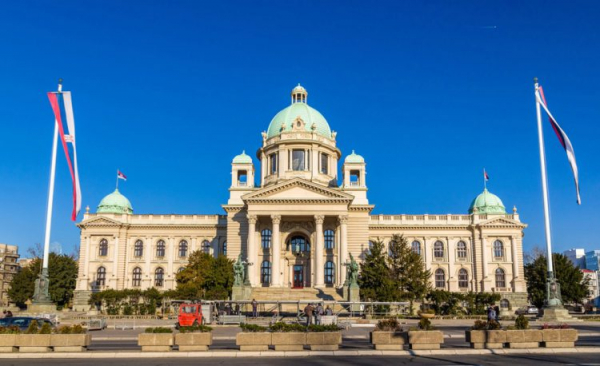 The monumental building of the Serbian Parliament on Nikola Pasic Square

In the recommendations of tourists, this place, called the National Assembly, deserves attention for its strict architecture. The building with noble outlines, founded at the beginning of the last century, is located in the city center and, despite its relatively modest (by architectural standards) age, seems to be an old building. Interesting compositions on the sides of the entrance: a man holding a horse. The installation symbolizes the conquest of nature by man.

Watch the beautiful places of Belgrade in this wonderful video! 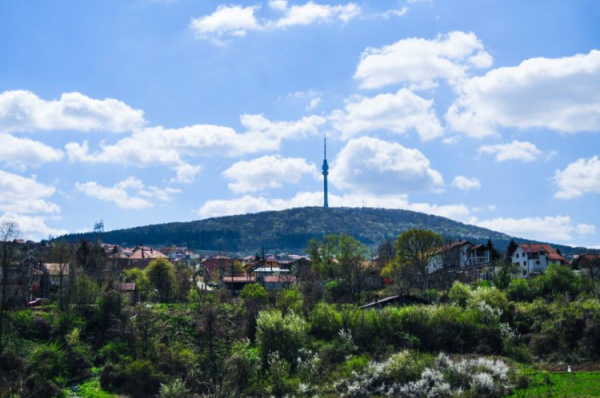 A 250 m high structure on Mount Avala also deserves the attention of tourists. At an altitude of 122 m there is a restaurant, 2 elevators work, television antennas rise above the observation deck. One of the places completely destroyed by the bombing in 1999. Reconstructed and opened to the public in 2010. 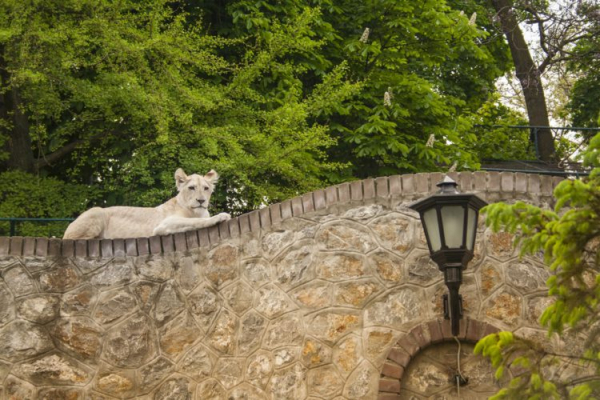 An albino animal in the Belgrade Zoo

The territory of a small but cozy zoo is full of hillocks, giving the impression of a level landscape. Definitely worth a visit if you don't know what to see in Belgrade in 1 day. Peacocks walk around the territory, aviaries and pens are located so that it is easy for visitors to take photos and videos. There is a cafe and a petting zoo for children.

According to the guests of the city, the museum of a man of world renown could be more impressive. There is a small area (only 3 rooms) and an insufficiently large number of exhibits. It is recommended to take excursions that include practical experiences. Of particular note is the overview of the scientist's personal belongings and the golden urn with his ashes. Please note that tickets are sold here for cash only. 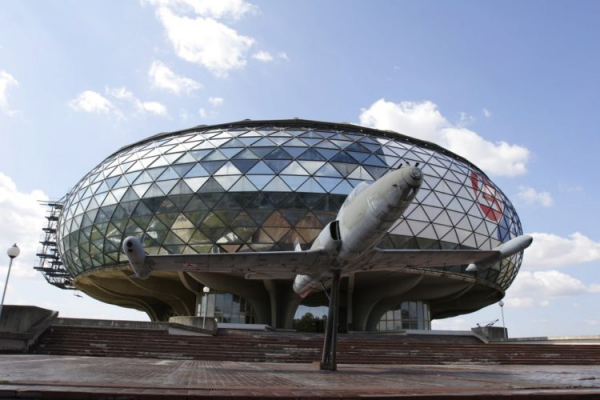 Exhibit of the Open Air Museum of Aeronautics

Many excursions in Belgrade include this museum in their tourist program. The most famous and interesting object is a fragment of an invisible aircraft shot down by the Serbs during the war in 1999. Here are military fighters, aircraft in all their evolution, examples of peaceful modern technology. The advantage of the museum is that most of the exhibits are located on the street, allowing you to view them for free. 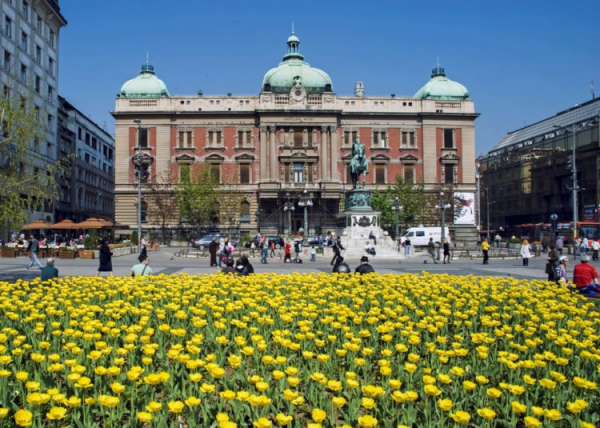 The museum is located in the building of a former bank and exhibits a huge collection of art and archaeological exhibits. The location on the Republic Square and the tourist rating attracts a lot of visitors here. The museum houses works by Renoir, Degas, Matisse, Rembrandt, Modigliani, Picasso and other famous painters. Entrance to educational programs is free. 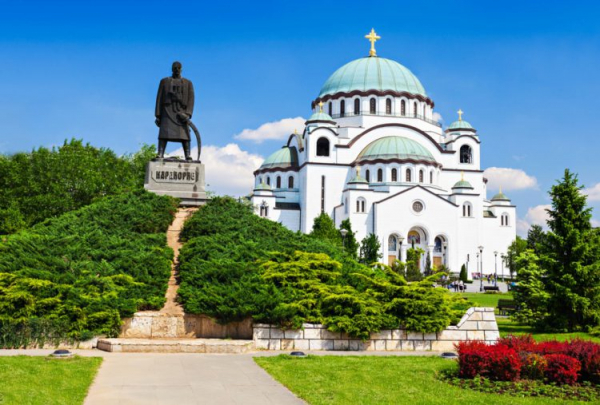 Considering the sights of Belgrade photo with names and descriptions, it is difficult to ignore the largest temple in the Balkans. With the simplicity of its architecture, the temple resembles the famous buildings of the Byzantine era. It has gigantic dimensions and a cozy, kind of homely atmosphere. The facade of the temple is decorated with white marble, and the inner walls are decorated with bright mosaics. The inner vault of the dome is painted with a fresco of amazing beauty and size. Outside, the domes are crowned with 18 crosses, and 49 bells are ringing from the bell tower. At the same time, about 10 thousand believers can fit in the church building. 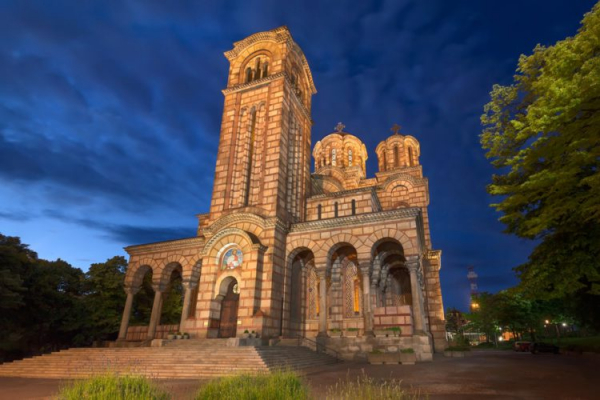 Church of St. Mark at night

Walking on a trip around the center of Belgrade, you suddenly come across this old church, surrounded by buildings of modern architecture. Made of red brick, the temple impresses with its size, while the interior decoration is very modest. Unlike other churches, candles here are placed in special iron boxes installed on the porch. The capacity of the temple is 2000 people. The entrance is decorated with mosaics, and the main altar and iconostasis are made of marble. The cathedral has a large collection of icons, and the remains of some national figures are buried here. The church has a Sunday school, a children's and an adult choir. 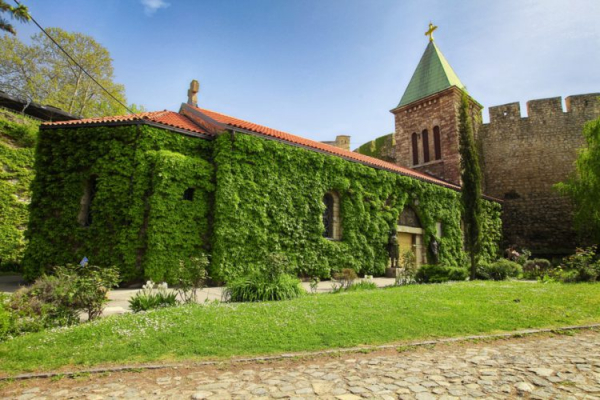 When planning what to see in Belgrade, be sure to list the oldest church in the city. The temple is illuminated by a man-made chandelier, assembled from cartridges, shells, sabers and parts of pistols. The church iconostasis, decorated with the finest gilded carvings, is also interestingly made. There are models of a knight and a soldier in front of the entrance. Once there was an armory here, which is reflected in the unusual equipment of the temple. 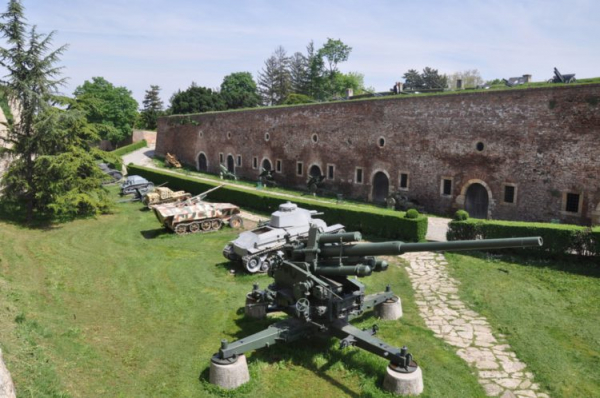 Located in the Kalemegdan fortress, the museum will be of interest to connoisseurs of weapons of the 19th-20th centuries. The exposition presents military artifacts, equipment, clothing from the period of ancient times to modern history. Equipment in the form of artillery of all calibers is placed in the open air, two floors are allocated for the museum itself. Undoubtedly, this landmark of Belgrade deserves a visit. Some rooms are equipped with interactive tablets that complement the expositions and tell about the events presented.

View of the National Theater from Republic Square

Belgrade attractions: what else to visit in Belgrade

Make a list in advance of what to visit in Belgrade for the time period allotted to you. Most striking here are the contrasts. Dilapidated houses give way to representatives of modern architecture made of glass and concrete, and quiet cozy neighborhoods alternate with noisy establishments where fun and joy reign supreme. 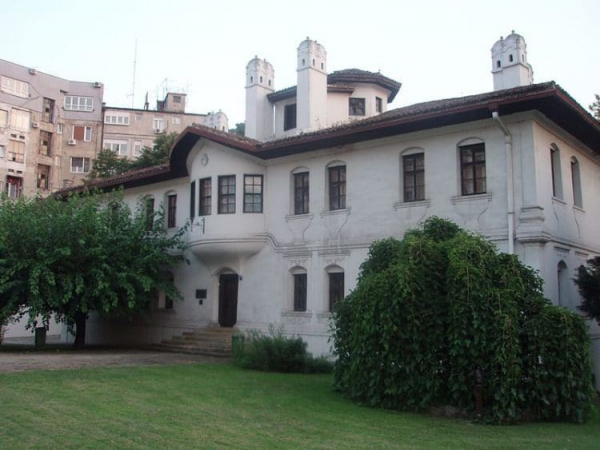 The wife of the former prince Miloš Obrenović once lived in this residence. The recreated interiors of previous eras give an idea of ​​how the representatives of the princely families lived. Rooms of huge size, gilded beds, sofa rooms in the Turkish style will fully meet your expectations. Perhaps even the most luxurious hotels in Belgrade are inferior to the palace in splendor. It is worth booking an audience or a show with an artist who will stage a real tea ceremony in advance. 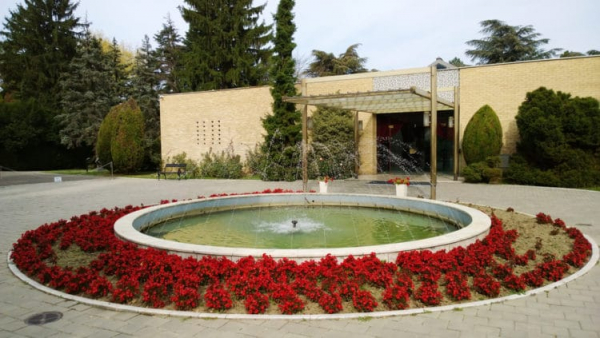 Fountain among flowers at the mausoleum of the former ruler of Yugoslavia, Josip Broz Tito

Include a piece of the country's socialist past in your journey. The building itself is devoid of pathos and looks modest both inside and out. Glass pavilions displaying personal belongings of Marshal Tito and thousands of relay baton, which were handed over to the leader during the sports days, are of interest. The entrance here resembles a theater huge mirrors, heavy velvet curtains and columns. A flowering garden is laid out around the tombstones. Visiting the mausoleum is free, but it is always not crowded here. 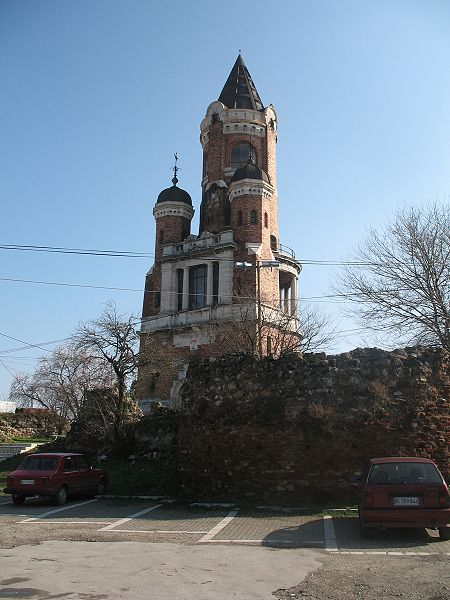 < /p> Millennium tower on the hill above Zemun CrniBombarder!!!

From the observation deck, where you can climb for a fee, a beautiful view opens up, although the tower itself is not very high. An authentic object in the Zemun district is a kind of symbol of Belgrade. Many inscriptions on the walls date back to the beginning of the last century. It is worth coming here to see the surroundings from above. 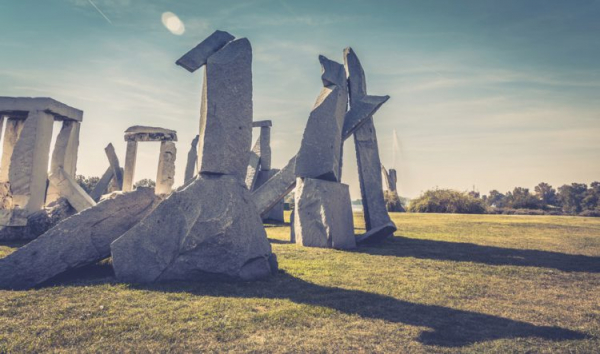 A peninsula on the outskirts of the city, turned into a place of rest. In summer there are always a lot of people who swim, sunbathe, play sports. The bridge over Ada, crossing the river, impresses with its elegant design, illuminated at night. In tourist reviews, a visit here is recommended to spend the whole day. At the end of the swimming season, a skating rink and ski slopes begin to operate here. 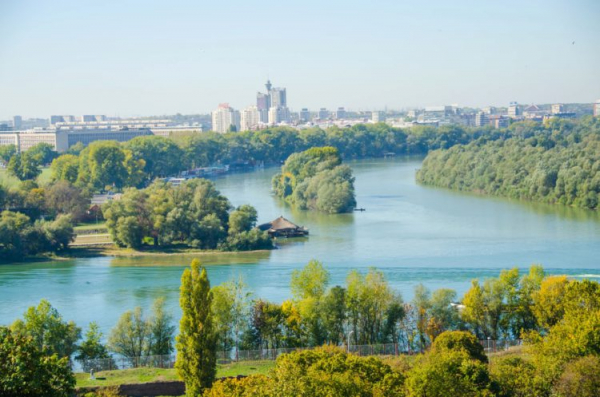 River banks of Belgrade with 16 islands stretch for 200 km. The city itself is formally located at their confluence, but has not completely descended to their banks. The 2850 km long Danube and the Sava (945 km) attract a huge number of tourists. The most beautiful view of the rivers opens from the Kalemegdan fortress.

The absence of a visa regime when entering Serbia is significant reduces the cost and simplifies the possibility of rest. Feel the mood woven from contrasting notes of the bitter memory of the past of the city and undying optimism. Relax in an environment of goodwill and famous Serbian hospitality!