The main Christmas dish in the United States is served on the table at other holidays, including Thanksgiving

In the autumn of 1620, settlers from Europe landed in North America in the area of ​​modern Plymouth (Massachusetts), founding a small settlement. They would hardly have survived the first winter if not for the help of the Pequot Indians, who showed the Europeans what and who to eat here.

A year later, the settlers gathered the first harvest and arranged a holiday in honor of this event known today as Thanksgiving Day. According to legend, one of the main treats was a fried turkey. The aborigines called her “firkee” (firkee). This endemic of the New World was found in abundance in the forests of North America and fell in love with the settlers. Turkey dishes have become a decoration of the festive table not only on Thanksgiving Day, but also on Christmas and Easter.

The tradition was also explained by economic considerations: slaughtering a cow meant a serious blow to the household, chickens were protected while they were laying eggs, and deer still had to be hunted. The turkey came to the rescue – juicy, satisfying, affordable. It is not difficult to breed birds: they are unpretentious in food and grow quickly, gaining weight up to 10 kilograms. In nature, turkeys live in friendly families, wandering in search of food.

Benjamin Franklin regretted that not this bird, but the bald eagle became the national symbol of the United States. In a letter to his daughter Sarah, he compared the moral qualities of an eagle and a turkey, reproaching the former for laziness and praising the latter for her courage in protecting offspring.

The US now has 315 million people (at the end of 2022, the US population is estimated at 333.3 million people – Note Vokrugsveta.ru). Annually for Christmas only, according to The National Turkey Federation (NTF), Americans eat about 22 million of these birds. It's easy to calculate that every fourth family eats the same dish.

A native of Florida, the chef of the US Embassy in Russia (in 2013 – approx. Vokrugsveta.ru) talks about the Christmas traditions of her country

Family reunion, Christmas tree, the best china on the table, a turkey like in the picture, chocolate chip cookies and a glass of milk for Santa.

How to prepare the filling for a turkey?

I bake it separately. This makes it tastier and faster. But my grandmother is sure that the filling should be prepared inside. She generally prefers, having put the baking sheet in the oven, not to think about it for all three hours. And I turn the turkey over and pour the juice over it, so it comes out juicier.

What else do you cook for the Christmas table?

Sweet potatoes with butter and sage, Brussels sprouts cabbage with bacon and balsamic vinegar, beans with mushroom sauce and crispy onions. A must-have – buns with a golden crust and a soft core.

Is there a festive dish of Russian cuisine that you like?

Our babushka (sister's mother-in-law) prepares a wonderful olivier. In another version, I don’t eat this salad, because it’s really difficult to make it tasty.

Secrets of the dish

When choosing a festive copy, American housewives prefer a chilled turkey marked free rangemeaning “free range”. The skin of the bird should be of a uniform light color, and the carcass should be whole and elastic.

A marinade based on water and citrus or apple juice will help keep the meat from drying out. Salt plays the main role in it – it retains moisture. And since a large turkey is usually chosen (at least half a kilo per eater), it takes about a day to marinate it reliably. Then the bird is stuffed and put in the oven for three to seven hours (depending on size). Such a cooking time is explained by the density of meat and the hardness of bones.

The filling depends on the imagination: how many families, so many options. Bread-based options are popular – white or corn, which is flavored with nuts and spices, cabbage with sausages and fennel, potatoes with pork and offal, mushrooms or vegetables with herbs. There are also unexpected moves: on the East Coast, turkey is combined with oysters.

How to prepare the filling, there is also no consensus. Some count & nbsp; – inside the turkey, others & nbsp; – outside, in a separate form. But if you stuff a turkey right away, the meat is likely to dry out, and the filling will remain unbaked. In addition, not much can fit inside the bird.

It is more convenient to cook the turkey itself on a brazier with a V-shaped grate. Firstly, excess fat flows into the pan, and secondly, you can easily adjust the position of the bird by turning it smoothly during baking, thereby evenly distributing the heat. If the household does not have such a device, a baking sheet is also suitable.

Serve the turkey on a wide tray. Often it is made of silver, decorated with intricate designs or carvings, and is kept in the family as a relic. It is cherished, polished to a shine and used only on special occasions. Two sauces can set off the taste of a festive dish – gravy and cranberry. Meat gravy, to which cognac is added for a velvety taste, is designed to emphasize the rich taste of the bird. Cranberry sauce can be quite liquid, and dense, like jelly, but always sweet. It plays on the contrast of textures and tastes.

Having gathered with family and friends, Americans forget about the time: Christmas dinner is long conversations over a glass of red wine. The year is behind us, and there is absolutely no hurry. 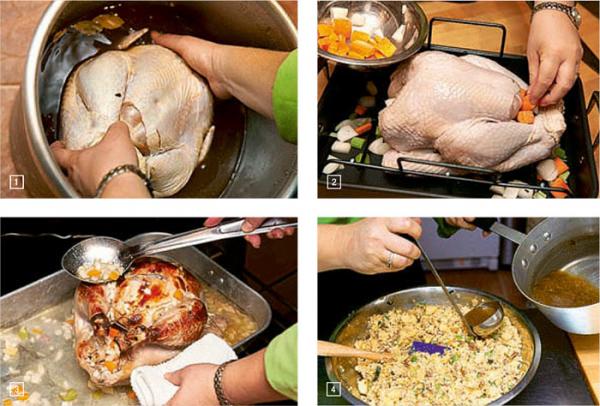 Marinade. Combine all ingredients, stir until salt and sugar dissolve. Bring to a boil, turn off the heat and close the lid. Cool down. Put the turkey in the marinade and refrigerate overnight. Before baking, soak in cold water for 15 minutes and pat dry.

Turkey. Preheat oven to 200 degrees. Coarsely chop the vegetables, place half of them in the turkey, distribute the rest on the roasting pan. Tie the legs tightly with a harsh thread, pass the thread under the bird and tie the wings on the chest. Grease the grate with sunflower oil and place on the roasting pan. Place the turkey breast side up on the grill. Brush with melted butter. Pour a glass of water (235 ml) into the roaster and cook the turkey for 45 minutes.

Pour over the juice accumulated in the pan, and add another glass of water. Bake for another 1 hour 45 minutes, basting with juice every half hour while turning a quarter of a turn. Add another half cup of water. The turkey is definitely ready when a meat thermometer inserted inside the bird in the thigh area shows 76 degrees. Let stand for 20 minutes before cutting.

Filling. Cut the cornbread into pieces and leave to dry overnight. In 100 g of oil, fry the bacon for 10 minutes, remove the bacon, pour the onion, shallot, celery, sage and thyme cut into medium slices into the pan. Simmer over low heat for 25 minutes until the vegetables are soft. Mix bread with vegetables and nuts, add 50 g of melted butter, eggs and a glass of chicken broth. Season with salt and pepper, stir. Transfer the bread and vegetable mixture to a greased form, cover with foil and bake for half an hour at a temperature of 175 degrees. Remove foil and add half a cup of broth. After 10 minutes, pour the remaining broth and bake for another 20 minutes. Serve the filling as a side dish.