In the past, people sought solitude here to commune with God. It was believed that on a rock, far from worldly fuss and temptations, communication with it would be better

Today, Meteora turned into a landmark – an ascending stream of tourists rushes here every day. Correspondents of “Around the World” joined him to check the connection.

Stepping on the ancient the path leading through the Old Testament forest up to Meteora, you feel that time goes differently here. Fearless turtles crawl out to bask in the sun's rays breaking through the foliage. The chirping of cicadas spreads in the thick air.

Climbing is easy, but the climb gradually becomes steeper: moving forward, you seem to plunge into the depths of history and get closer to something important. Also, ten centuries ago, the first hermits walked here, breathed the same air, listened to cicadas, carefully avoided impudent turtles. A little more effort & nbsp; – here it is, the last step of the stone staircase, and … a long curved line to the cashier of the monastery. “Entrance – 3 euros. Cards are not accepted. There are no benefits.”

Focus of the Celestial Empire

— You couldn't would you like to take a picture of me so that you can see the monastery of the Great Meteor and the gondola of the cable car floating towards it?

– And you press the button halfway and hold it … Wait, I'm not ready yet.

– But the gondola has already left.

— Oh, what a shame… It's good that the monastery remains. (Laughter)

— Where are you from?

The interlocutors switch from English to their native Chinese; a minute later, a rearguard of compatriots absorbs them in a raging stream.

From heaven to earth

From the inner courtyard of the monastery of St. Varlaam, a panorama of the neighboring rocks and the valley opens, part of which is occupied by the “toy” city of Kalambaka. At times, the parapet is simply not approachable: someone stands for a long time and looks down, someone frantically takes a selfie, many couples recreate the famous pose of Jack and Rose on the bow of the Titanic. The view really gives the feeling of flying…

“On the ground” brings me back the noise and fuss at the porch of the temple. Photographer Konstantin tries to fight off the monk. “I didn’t photograph you!” – Kostya justifies himself in Russian and in English. It doesn't help: the monk angrily mutters something in topo Greek, pulling Kostya's backpack with one hand, grabbing the lens with the other. “So him! There is nothing to break the rules! ” & nbsp; – a remark is heard behind my back. Turning around, I see a stout middle-aged man in shorts sitting in a shady gallery between the temple and the door with the sign “Do not enter!” ends quickly. The monk, grumbling and pointing his finger at the sign with the crossed-out camera, dissolves into the crowd of tourists.

Our icons are the most beautiful!

“Icon painters sit separately,” says the guide Alexandra, who works with Russian groups. “The monks used to paint, but now lay people at churches.” So the canvases are brought to the workshop ready-made. Further work is done mainly by women: they attach the canvases to the arks and varnish the wooden parts with mordan. It gives the salary stickiness (like the garlic used in the old days), due to this, gold leaf is kept on it.

At the final stage, a “patina” is applied, and a certificate is attached to the back, allowing the product to be exported abroad. “On Athos, the writing and creation of icons is accompanied by prayers,” says Sasha. “We have mass production. That's why our icons cost from only 27 euros. If the icon is painted according to all the canons with observance of rituals, then its price will be at least 127 euros. 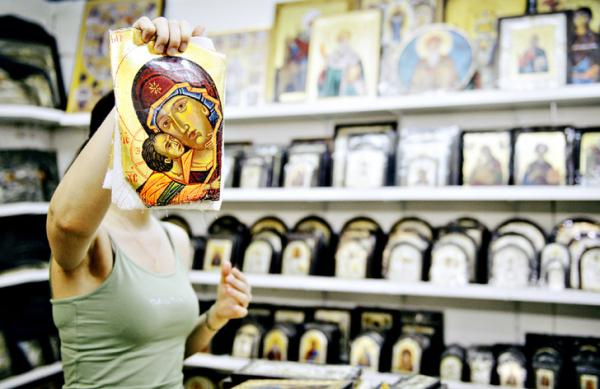 Soaring in the air

So the word “meteora” is translated from the Greek. Orthodox monasteries are located on the tops of rocks, two kilometers north of the town of Kalambaka (former Stagi). The cliffs rising above the Thessalian plain reach 400 meters in height.

Millions of years ago, a river flowed in this valley, the waters of which washed up the stone pedestal of future monasteries. A series of earthquakes pushed the bottom up, forming a plateau with many vertical faults, the wind completed the process. According to legend, the first hermits climbed the peaks around the 10th century. They lived in caves and in rocky depressions. Saint Athanasius (1302–1380) is considered the founder of the monasteries.

Currently, there are six active monasteries in Meteora: four male (Transfiguration of the Lord, or Great Meteor, St. Barlaam, the Holy Trinity and St. Nicholas Anapavsas) and two female (St. Barbara, or Rusana, and St. Stephen). In total, there were 24 monasteries in Meteora, not counting sketes, caves and single cells. Many of them have survived to this day only in the form of ruins. In 1988, the monasteries were included in the list of UNESCO World Heritage Sites. Meteora is visited by about two million tourists a year.

Your own monastery: how people and countries try to isolate themselves from the world and what it leads to

The martyr, tied to a post, meekly gazes at the torturers sticking steel hooks into his body. The torn flesh gapes in deep crimson gouges. In the next scene, the unfortunate man is subjected to a new torture: the skin is carefully removed from his torso in wide strips. He himself is already impartially looking at the sky, watering the district with a molten haze. Fire also turns out to be an insufficient means: torture with a fire and sprinkling coals on the face do not give the desired result. Therefore, in the end, the sufferer is simply cut off his head …

“Well, tin! Tarantino is resting…” – a snippet of Russian speech is suddenly heard. Two guys are discussing a fresco depicting the torment of St. Charalambius. The cathedral church in the monastery of St. Stephen did not have wall paintings. Even today, the community entrusted this work to the Corinthian artist Vlasios Tsotsonis.

In the light, air-conditioned sales area of ​​a specialized store, it is not overcrowded, as in a supermarket before the New Year. Two compatriots wander along the shelves with icons.

– Still would! At my work, one packer of her man with her help discouraged drinking. True, he began to stutter a lot. Where is the consultant? The niece asked to bring the “Word Flesh Being”. Her pregnancy is difficult.

– And here is the consultant. Elena, advise something as a gift for an unmarried daughter.

– Icon – the best gift! Let's go over here. As you probably know, certain miracles are associated with different icons. We have one too! For example, at the original “Fadeless Color”, which is located here in Meteora, people often met their life partner. Accordingly, they turn to her for help in creating a family. Will you take? Do not forget to consecrate only later.

Father Venediktos, monk of the monastery of St. Varlaam:

“Today, Meteora has electricity, running water, even the Internet and civilized toilets for numerous guests. Although my predecessors relatively recently had to carve special niches in the rocks to collect rainwater, which was used for drinking. But they lived in solitude, in prayer. But in recent years, many monks could not withstand the onslaught of civilization and went to more peaceful places.

Now there are a couple of dozen of us left in all the monasteries. Peace and quiet, of course, is not enough. But if we leave, what will become of the Meteors? Here they will arrange a hotel, as it was once before, or something else in the same spirit! My destiny is to pray. I will pray here that God does not leave these places…

— These fifty acres of land under the rocks of the Meteors are mine. I am Dimitris Kritsas, owner of a tourist office in Kalambaka. I worked in Formula 1 marketing for almost twenty years. One day my cousin called me and said that there was an opportunity to buy land directly under the monasteries for next to nothing. I bought. But for a long time I could not understand what to do with it. And then I went to Disneyland in Orlando, and it dawned on me: Meteora Thrones – the world's first Orthodox themed amusement park!

You see, Mickey Mouse is in Orlando, and Jesus Christ will be here! Well, the attractions are appropriate: Mount Sinai, Hagia Sophia, Athos (this one is mainly for women, because they are not allowed on a real sacred mountain). There will also be museums, theaters, a skating rink. To implement the project, I need to find investments for 50 million euros, another 50 million were promised by the Greek government. To tell the truth, I really count on Russian businessmen. If they give money, a life-size copy of the Cathedral of Christ the Savior will be erected in the park.

ATTRACTIONSMuseum of Natural History of Meteora and Museum of Mushrooms in Kalambaka, traditional village of Kastraki, man-made lake Plastiras in Karditsa at an altitude of 800 meters.
TRADITIONAL DISHES keftedes meatballs in tomato sauce, fried forest mushrooms.
TRADITIONAL DRINK tsipouro – grape distillate, in Thessaly a version with the addition of anise is common.
SOUVENIRS craft soap based on olive oil with lavender, honey, orange oil.

DISTANCE from Moscow to Kalambaka – 2150 km (from 3 hours in flight to Thessaloniki, then 2 hours 45 minutes by bus to Kalambaka)
TIME behind Moscow for an hour in winter, coincides in summer
VISA Schengen
CURRENCY euro