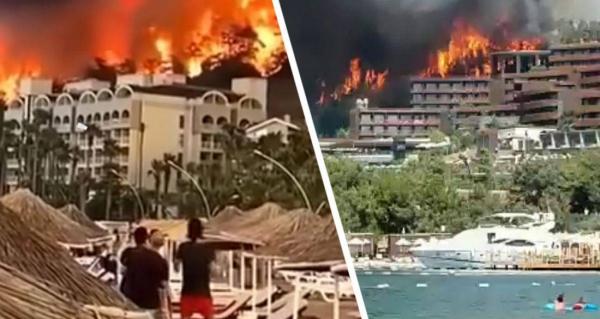 In a three-star hotel in Antalya, frightened tourists had to evacuate to the garden adjacent to the hotel. The cause was a fire that broke out on the roof of the hotel.

According to local media reports, the hotel was located on the popular promenade – Konyaalti Boulevard in Antalya. Firefighters were called by employees who noticed the flames rising on the roof. The tourists were taken to the garden adjacent to the hotel.

However, they will probably have to relocate, since the preliminary cause of the fire is the flame that took up the chimney. The reason for this is that the chimney was not completely cleaned, and the dust and soot that accumulated there broke out. As a result, the hotel will suffer not only property damage from fire, but also a fine for non-compliance with fire safety.

Recall that this is not the first fire in the hotel this season. In early August, an emergency that frightened tourists and local residents occurred in the Turkish resort of Manavgat in the Sorgun region. Late at night in a five-star hotel, the name of which is not given by the local press, a beach restaurant caught fire. According to the assurances of the tourists who fled from the hotel, the fire was so strong that even explosions began, and the vacationers themselves fled. Apparently, the gas cylinders in the kitchen detonated. The locals feared that the fire would spread to the relict pine forest that surrounds the hotel. Luckily, there were no casualties in the incident. Read the details here.

At the beginning of September, a hotel in the Alanya region was also badly damaged by a fire. Some of the tourists were evacuated, the rest fled, two firefighters were injured. The causes of the fire are being investigated. According to Turkish media, the fire broke out around 11:00 am on the roof of a hotel in the Kestel area. The fire began to spread very quickly and in a short time covered the entire surface of the roof. Helicopters had to be brought in to extinguish the fire (details here).

For those who value a healthy lifestyle, we recommend reading: “Gardening has been found to improve mental health and prolong life.”