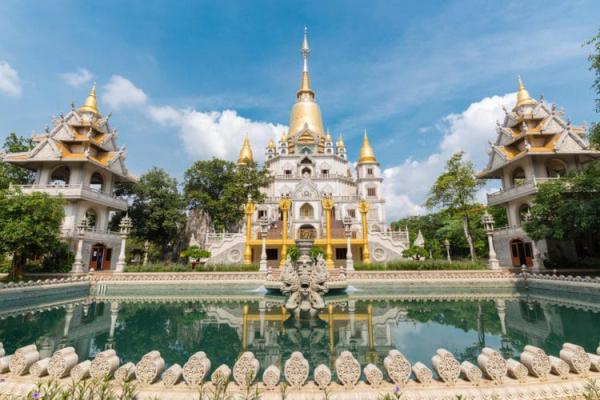 Outstanding attractions in Ho Chi Minh City are represented by a huge complex of modern skyscrapers, as well as the country's priceless cultural heritage. A selection of the best and most visited places in Vietnam will help determine what to see in Ho Chi Minh City.

What to see first in Ho Chi Minh City?

A truly legendary city with a rich and unique historical past. Being the largest city in the country, Ho Chi Minh City has embodied bright and outstanding elements of oriental culture. 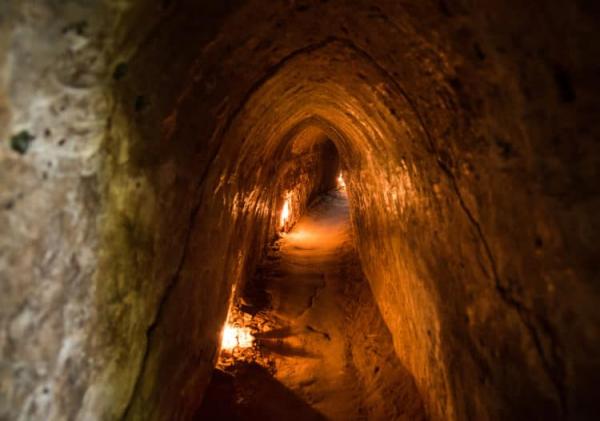 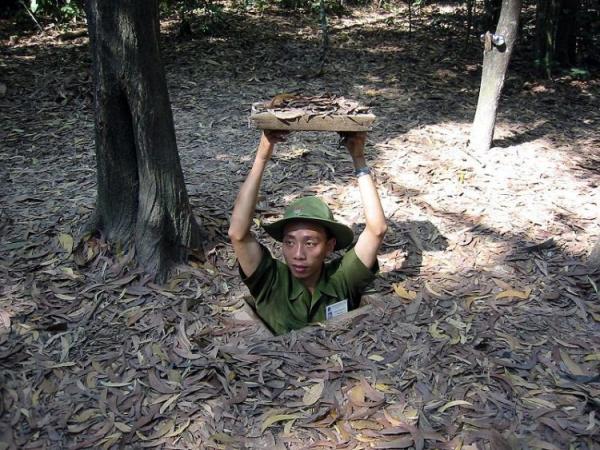 A soldier demonstrates the entrance to the Kuti Tunnels

If you are tormented by the question of where to go in Ho Chi Minh City, the first thing you should do is visit the legendary Kuchi Tunnels, because excursions in Ho Chi Minh City always include visiting them. These places were used by the Viet Cong in the 20th century as shelters from enemy fire during the conduct of hostilities against American troops. In addition, ingenious underground passages up to 150 m long were used during covert attacks on the Americans.

Evidence of the presence of the French in the city led to the construction of the main attraction of Ho Chi Minh – Notre Dame de Saigon Cathedral. This amazing place attracts the attention of tourists due to the incompatibility of the external appearance of the cathedral with the surrounding elements of the city. The classical form of the French cathedral looks unusual against the backdrop of oriental nature and architecture.

3. Observation deck of the Bitexco tower 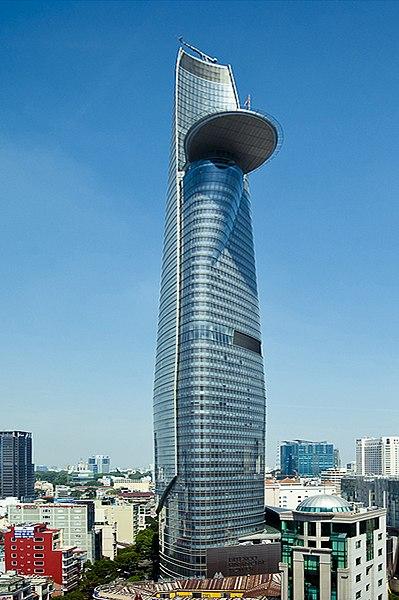 The financial tower in the central area of ​​the city is something that will obviously not be superfluous to see in Ho Chi Minh City. The skyscraper, which belongs to the company of the same name, is equipped with a stunning observation and helipad. Impressive size and breathtaking height are the characteristics of this amazing place. Reviews of the Saigon Skydeck say that the view from the 49th floor of the building is simply incredible, as a 360-degree view is created here.

4. Building of the People's Committee 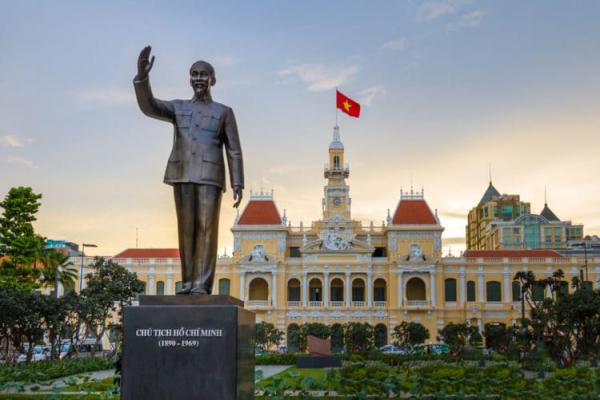 An experienced tourist will definitely visit the building of the People's Committee of amazing beauty – an example of the unique French architecture of the colonial era. The building with an elegant facade and bright-colored tiles is made in the Baroque style. Streams of curious tourists flock to this place to feel the spirit of the legendary Paris in the corner of Southeast Asia. 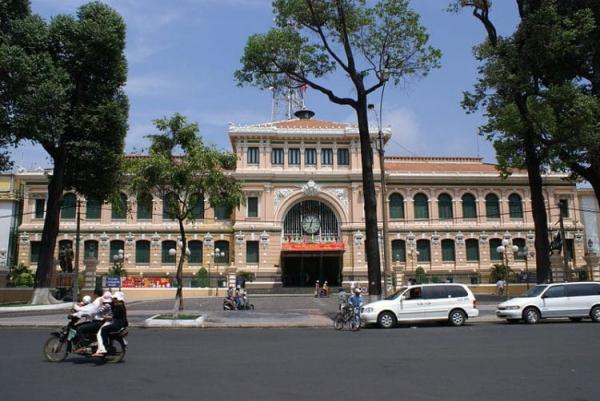 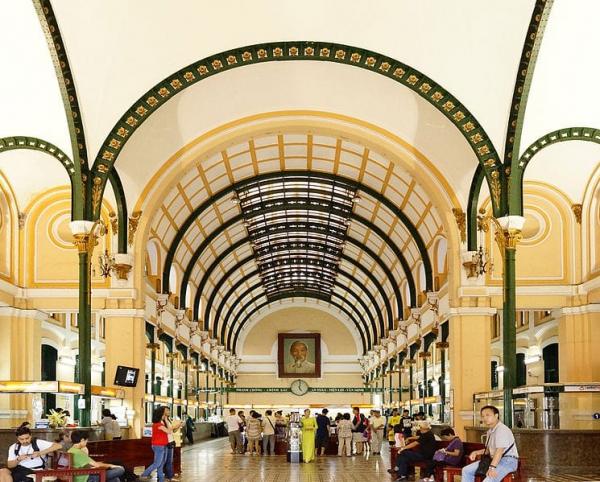 The sights of Vietnam, to one degree or another, are the remnants of local life from the time of French colonization. In the question: “what to see in Ho Chi Minh City in 1 day?”, This place should be preferred, since the Cathedral of Our Lady of Saigon, already known to us, is located very close. Locals as well as guides in Ho Chi Minh City are no doubt aware that the post office was designed by the world famous French engineer Gustave Eiffel.

The main attractions of Ho Chi Minh City are briefly characterized as a huge cultural heritage of the domination of the French colonial empire. The Reunification Palace or the Independence Palace was built back in 1868. Throughout its existence, the palace has been the residence of many local rulers. Once the palace was destroyed, but it was restored thanks to the efforts of local authorities. 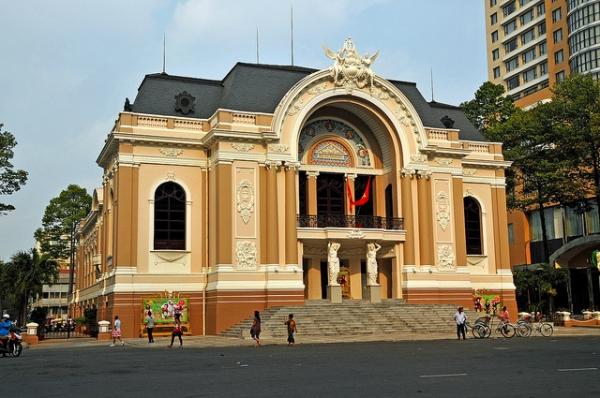 The list of “Best Ho Chi Minh Attractions” adds to the notorious opera house from the time of French domination. A huge beautiful building, made in the colonial style, attracts tourists with its stunning appearance. At night, in additional lighting, the opera house casts a unique light orange hue. The building hosts many cultural events: music concerts, performances, ballets and much more. 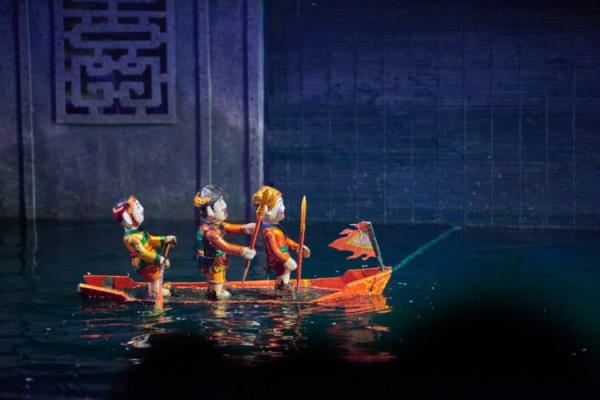 The sights of Ho Chi Minh City are divided into French and Vietnamese. The puppet theater “The Golden Dragon Water Puppet Theater” has a unique feature: for thousands of years, almost nothing has changed in the productions and plot. Heroes and figurines play all the same uncomplicated roles and plots. Visually, the presentation is excellent: skillfully carved wooden figures seem to float on the water and form a single picture. 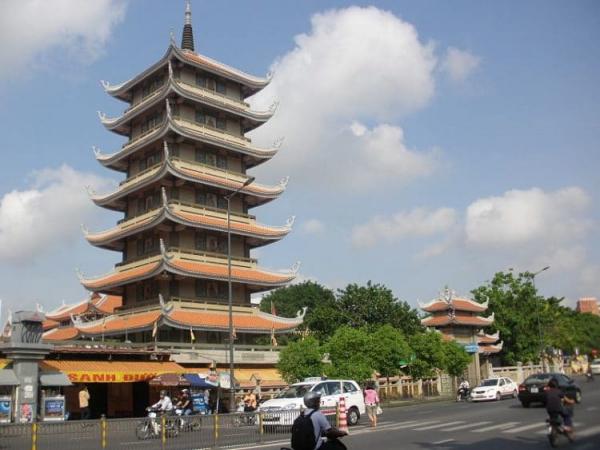 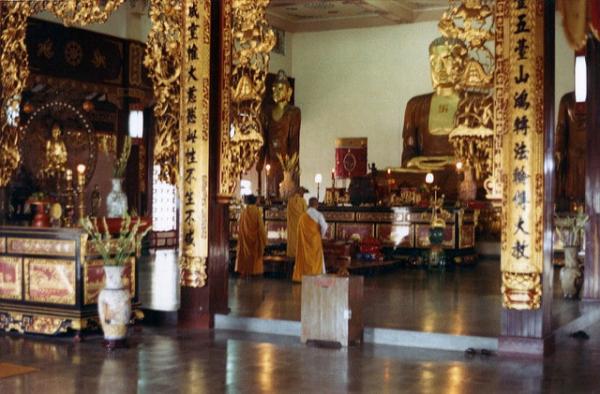 Monks at the statue of Buddha inside Vinh Nghiem pagoda manhhai

Through the joint efforts of a Japanese-Vietnamese team of architects in the middle of the 20th century, the largest pagoda in all of Ho Chi Minh City was built. Modern Japanese architecture is embodied in the exquisite and subtle facets of the building. The pagoda is named after a legendary Buddhist preacher and is a magnet for many foreign tourists. 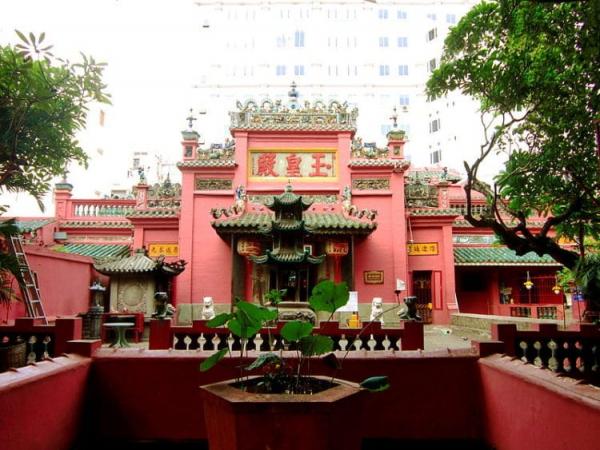 The ruler of heaven, the supreme god Ngoc Hoangu, according to his destiny, is the same Jade Emperor in Taoism. The Jade Emperor Pagoda was built in 1909. According to the traditions of Chinese architecture, special holes were made in the roof of the building for the penetration of sunlight, and the room itself was filled with many candles. 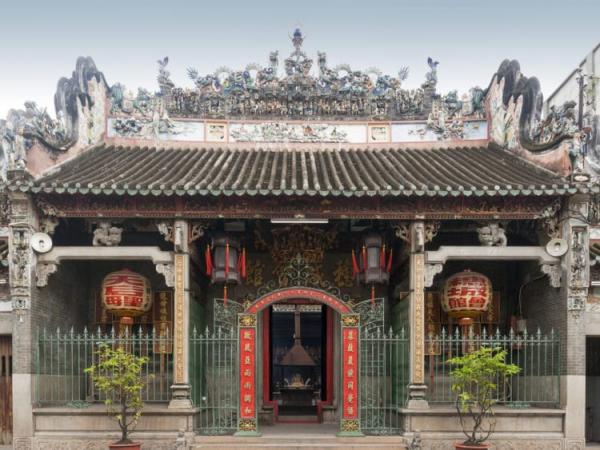 The journey of an experienced and experienced tourist should undoubtedly begin with this place of worship. This is due to the fact that Tien Haue is the Buddhist goddess of all travelers, as well as seafarers. The temple has its own mystical history. Since polytheism is sacred to the Vietnamese, similar pagodas and altars can be seen throughout Ho Chi Minh City. 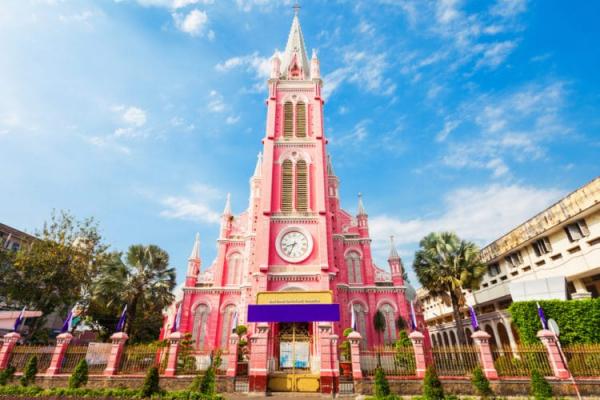 French dominance has brought another example of colonial architecture to Ho Chi Minh City. Tan Dinh is a temple whose construction began in 1880. This church is the most beautiful place in the whole city. 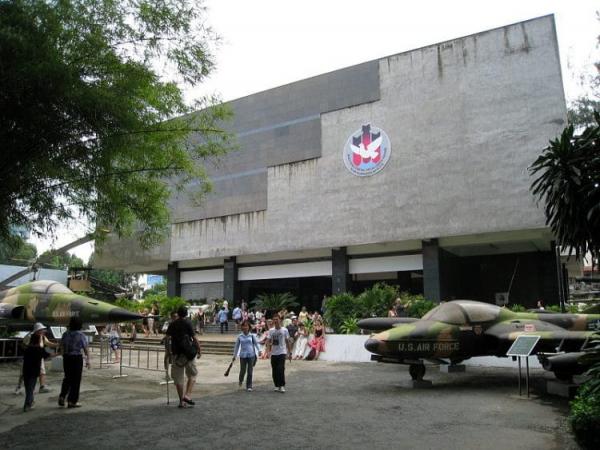 The tragic past of Vietnam is captured in this legendary place. The museum contains evidence of US military intervention. The museum's original name in 1975 was “House for the Display of War Crimes of US Imperialism and the Puppet Government of South Vietnam”. The exposition of the museum consists of military equipment, weapons and unexploded ordnance. 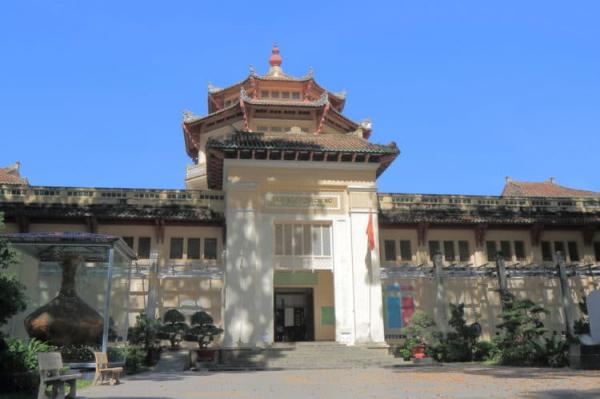 The cult place of Ho Chi Minh City attracts not only visiting tourists, but also students of local universities. The joint museum contains exhibitions and expositions of the history of Vietnam, from the time of the birth of the country to the last imperial Nguyen dynasty. 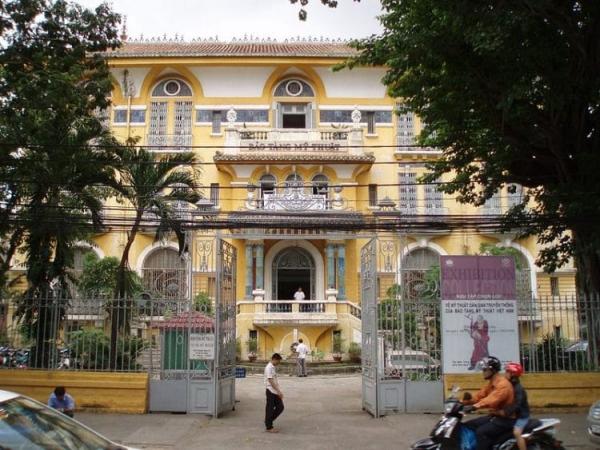 A trip to Vietnam should include not only visiting secular attractions, but also visiting the national and cultural riches of the country. An outstanding fine art museum in Ho Chi Minh offers tourists exhibitions of sculptures, oil paintings, woodcuts, Vietnamese ceramics, etc.

The sights of Ho Chi Minh City, photos with names and descriptions are presented above in the text, however, the interesting places of this amazing country and the city of Ho Chi Minh City have not ended. We suggest you familiarize yourself with the following list of places worth visiting:

The review of this amazing place could be divided into several large, voluminous articles, but it's better to see it once. Among the exhibits of the museum, which are worth mentioning here: a room dedicated to the country's greatest doctors; a room that demonstrates the development of traditional medicine in Vietnam; a room with oriental medicine (Chinese and Korean), etc. 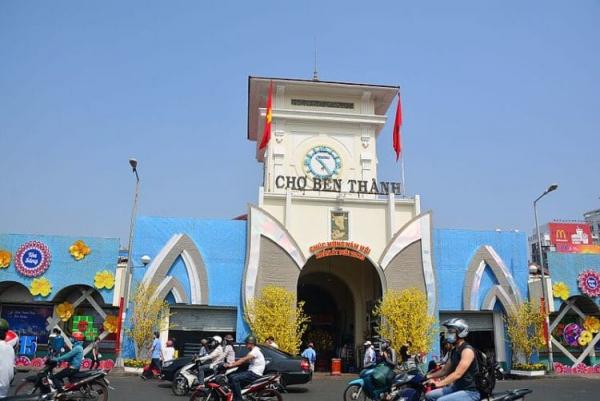 Connoisseurs of rare souvenir jewelry and household utensils should definitely visit the huge bustling market in the center of Ho Chi Minh City. The atmosphere of this place, as well as national street food, will allow you to immerse yourself in the atmosphere of the East. 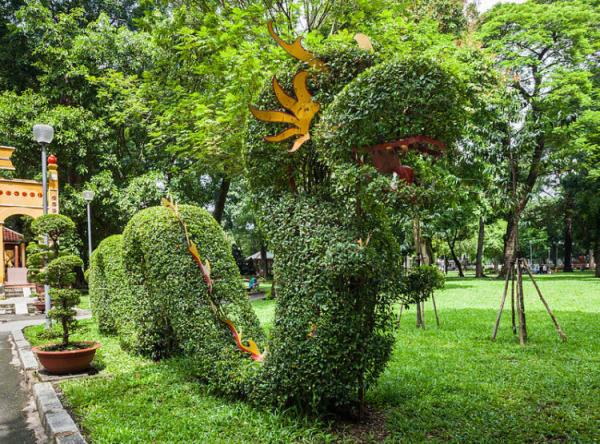 Tao Dan Park is the clearest example of a peaceful urban place to relax. Spread over an area of ​​10 hectares, the park is a great place to enjoy the fresh scent of rare trees, as well as take a break from the dusty, noisy environment of Ho Chi Minh City. The green zone is located in the city center, which is a definite advantage during a long and tiring walk. 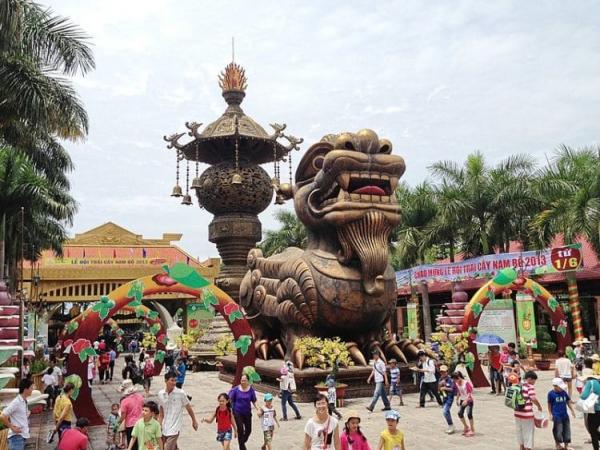 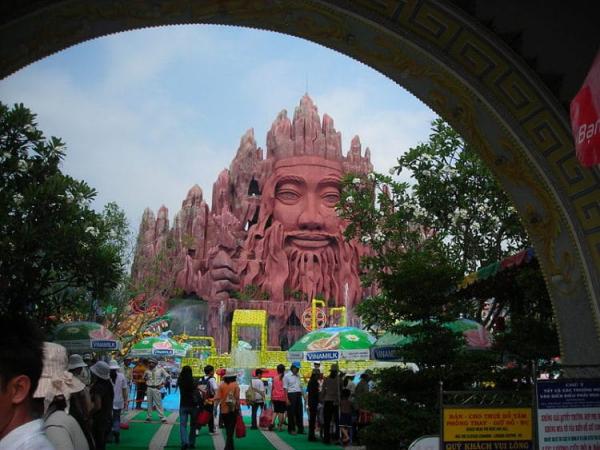 Suoi Tien is undoubtedly something that absolutely every tourist must visit in Ho Chi Minh City. The amusement park is not only the center of modern attractions, but also a place where the country's historical heritage is intertwined with quirky religious-themed sculptors. This colorful place broadly represents the vibrant color palette of the East. 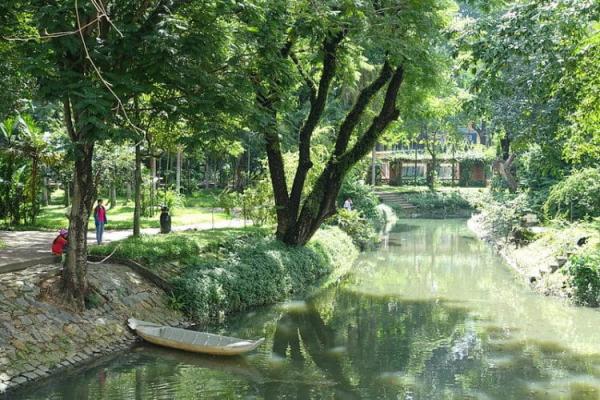 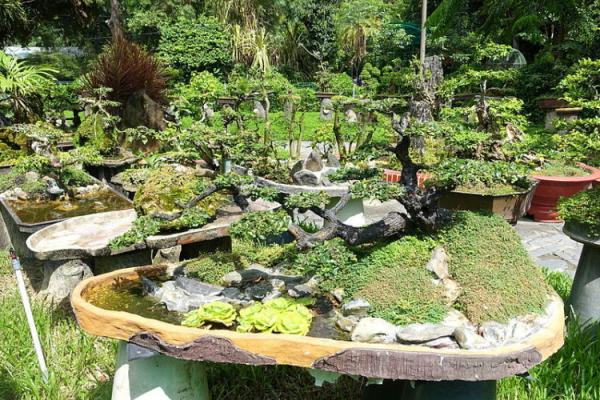 The rarest white tiger in the Ho Chi Minh Zoo

If excursions to the zoo are quite commonplace for most tourists, then visiting the Ho Chi Minh Botanical Garden is the number one priority. The French government and outstanding minds of the 19th century created the legendary botanical garden, which is filled with the rarest species collected at that time. The main temple of the Cao Dai complex in Teinine The Cao Dai religion, which was created directly in Vietnam by a native of France, was captured in the construction of a huge temple complex. The scale of the building, the interior of the amazing view and colorful ceremonies – all this makes an unforgettable impression.

through a huge area, will allow you to enjoy a special view of Ho Chi Minh City. See the inside of the city, the life of ordinary people and the nature of the country. In addition, the Saigon River is a passable and frequently used navigable means of transportation. So, some sights can only be visited along the Saigon River.

Vietnam is an amazing country with a rich cultural and historical heritage. Visiting Ho Chi Minh City will give tourists not only a comfortable stay, as the hotels in Ho Chi Minh City are incredibly beautiful, but also an immersion in the rich and immense beauty of the city. Read also about the sights of Nha Trang and be inspired to travel further in Vietnam.