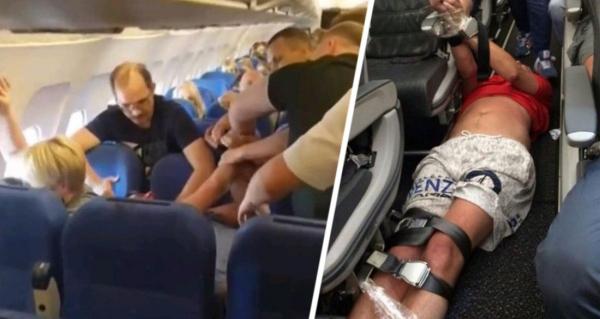 The right to legally “neutralize” air brawlers with the help of plastic handcuffs and belts was given to flight attendants of Russian airlines, as well as employees of aviation security services on the ground. An official government decree allowing them, among other things, to take these measures came into force on September 1.

According to the text of the decree, these measures are “needed to deter air brawlers who threaten flight safety, pose a threat to the life or health of others passengers or crew. The means of restraint “should be kept on board out of the reach of ordinary passengers.”

At the same time, according to the letter of the law, first flight attendants will have to try to stop his actions without special means. If the brawler does not calm down, the aircraft commander must demand that the illegal actions be stopped. If this does not help, the aircraft commander gives the flight attendants an order to use special equipment.

It is worth noting that in fact of such a delay, the rest of the passengers will have to wait a long time upon arrival. Since, according to the decree, passengers will have to remain on the plane until law enforcement officers, as well as doctors (if there are victims as a result of the debauchery), get on board. However, earlier the most violent brawlers had to be twisted with improvised means – most often with adhesive tape, and of course, upon arrival, hand them over to the police.

Air carriers have not yet specified whether they are ready to resort to new measures. Although the airlines themselves have asked for this more than once. Recall that also – since 2018, Russian airlines have also had black lists of passengers, according to which a brawler who previously rioted on board may be denied transportation.

We also recall that the loudest air brawl in the history of Russian For the time being, aviation is considered to be the brawl of Sergei Kabalov, who on January 11, 2013 was rowdy on board the Kogalymavia airliner flying from Moscow to Hurghada. Among other things, the brawler inflicted bodily harm on the airline's flight attendant, threatened to kill the pilot and tried to break into the cockpit, and the liner threatened to land directly on the surface of the sea. As a result, the brawler had to be searched for, as he tried to leave Russia, but on March 7, 2013 he was detained in the Grodno region of Belarus, where he arrived at the end of January from Ukraine, where he had been hiding for more than a month. As a result, the Moscow Regional Court sentenced the brawler to 3.5 years in a strict regime colony. Read the details at this link.

For those who care about a healthy lifestyle, we recommend reading: “A nutritionist revealed the secrets of detoxification and body cleansing with natural products.”