They fumigate guests with eucalyptus smoke, don't be afraid to leave children in the jungle, and send witchers on those who misbehave. And they turn to the spirits of their ancestors for advice

One of the indigenous tribes of Australia. The number & nbsp; – about 400 people. They live in the north of Queensland along the ocean, near rivers and in the mountains, mainly in the area of ​​​​the Mossman Gorge reserve. They speak the Kuku Yalanji language. They profess Christianity, and local beliefs are also common. Many natives of the tribe died at the end of the 19th century as a result of clashes with European colonists. 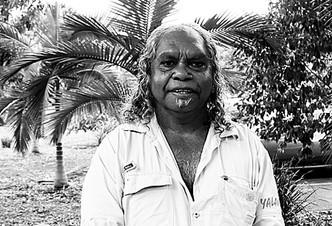 Elder of the Mossman community of the Kuku Yalanji tribe (in 2015. — Note by Vokrugsveta.ru)< /p>

Born in 1957 near Mossman, a town in the state of Queensland (Australia).
Went to high school, but did not finish it. He worked on sugar cane plantations owned by a family of local farmers Merdey. Together with them, he opened the Mossman Gorge tourist center in August 2012, which provided employment for 70 members of the Mossman community during the high season. In 2013, he was named Cairns County Person of the Year.

“If you want to live, you need to be careful in everything”

I live in beautiful places. In our language, we call this land Bubu, which means “homeland”. She belongs to us, and we belong to her. And so it has been for thousands of years.

Our people bear the name “kuku yalanji”. It means “those who speak the language of Yalanji”. We have not forgotten our mother tongue. I speak it at home with my children. And I studied English at school, but, apparently, not enough, I always had problems with grammar. Now I ask myself: why did you leave school so early, Roy … But you had to work, help your parents.

Our legends teach children to see danger, to survive. These are stories about crocodiles, snakes, evil spirits, whirlpools. It's black and black in the pool, you can't see anything, and anything can be there. Crocodile, for example. And if you want to live, you need caution in everything. I have never heard of one of ours being killed by a crocodile. And all why? Because our man remembers from childhood: when you go to the river, make sure that the path is safe. Throw something into the water and look carefully. Look for traces, signs.

We can't watch the kids all the time like you can. Our children are early learners. Once they start walking, they often walk on their own. They understand that it is impossible not to obey – it is dangerous. The mother will call out to the baby: “Dubu-lee”(“There is an evil spirit there”), and the child will hear her and immediately turn back. When he grows up, he will understand what the danger is …

Earlier, grandparents took children to wander in the jungle. At six or eight years old. For a long time, three years. It was a school. They taught everything they knew. And then left in the jungle for three weeks alone. Everyone passed this exam, nothing bad happened…

“Grandfather is the last king of the tribe”: how the princess of Gabon treats people in Siberia

“Scars are proof that you belong to the world of adults”

The rite of initiation exists to this day. Our women and men have separate sacred places for this. For women – at Cape Tribulation, near the water holes. They come there when a child is born, or when a girl becomes a girl, or before a wedding. This place gives strength, heals. I don't know more – these are women's affairs.

Men have their sacred places. We are going to the mountains. There, boys become men through pain. Sometimes a tooth is pulled out, sometimes their ears or nose are pierced, sacred scars are applied to the skin. They cut the shell with a sharp edge, then rub it with hot ashes to kill the infection. Scars are proof that you belong to the adult world.

Marriage is an important event at the beginning of adulthood. Previously, a man had to take a wife from another tribe. His parents found her. A year before his marriage, the guy spent in the tribe of the bride – he studied the language. But now it's different. I do not interfere in the choice of children, let them decide.

We have a fumigation ceremony. Everyone who comes to us, a tourist for example, must go through it. We burn eucalyptus leaves and tea tree bark, sprinkle water to make smoke come out, and say special words. It's like a welcome and a cleansing. The spirits of our ancestors feel who came to us, a bad person or a good one. If the spirit does not like the guest, he will give a sign, for example, send him a disease.

The spirits of my ancestors guard me, I know that. When I wander through the forest, I feel that they are around me. These spirits are in the trees, in the rocks. When I don't know what to do, I ask them. They send me a sign, and I say: “Oh, yes, that’s how it turns out.”

At noon, when I go swimming, I also speak aloud to the spirits of my ancestors, sing, ask their advice and I beg them: please protect my people, make us strong… The most sacred place for us is the cemetery where our ancestors lie.

We know who our forefathers were. The elders know. Because they hear and understand their ancestors. We sit around the fire and the elders “read” each one like a book. Old people feel both the past and the future. They can tell you to your face: “You will become the next elder of the community.”

People of the iron forest: how life works in the Korowai tribe

“The Witcher does his dirty deeds in the dark”

We know many potions that are prepared from seeds, herbs, leaves – everything natural. And in addition to a good doctor, we have a witcher doctor. If, for example, someone stole a woman from another, he will want to take revenge. And send a witcher. When a person is asleep, the witcher will cut off a lock of his hair, take him up the hill and say his spells. The witch doctor time is night, he always does his dirty deeds in the dark.

Of course, white doctors are now coming to our community. We have our own little clinic, the best in town. We built it ourselves. The townspeople didn't help us at all. And now they also want to be treated with us … Our women give birth in clinics. And before, they always managed with their midwives, and nothing. But the new generation thinks differently … In her life, our woman usually gives birth to five children.

Everything in our world is connected. You can't interfere. Here is a rock on Cape Tribulation Beach. It's a cursed rock. Sometimes children unknowingly take a stone, and then something bad happens to their family. Many people come to me to return the stones. For example, a man says: “We just got married, but something is wrong with us, we will probably get divorced.” It turns out that we walked along the beach, picked up a few stones. And then I answer: “Friend, take these stones back as soon as possible, otherwise you are a finished man, your wife will no longer love you.” This is how it happens…

Spirits guide our people, punish if a person misbehaves. We do not judge ourselves. Although many years ago & nbsp; – yes, it happened. They were punished by piercing the leg with a spear. The tip of the spear was smeared with poison. Serpentine, for example. The man could no longer walk after that. But now all this is in the past …

We used to have a big sacred tree, all entangled with wild vines. It took care of us, and we decided all important matters under it. It was inhabited by the spirits of the ancestors. One afternoon I went up to this tree and said, “I know you guys are here. I want you to open up to me.” Went home and went to bed. And in a dream, I was standing naked by this tree, and a spirit came out of the tree and said: “Come in. Get inside and see for yourself what's in there.” And I went in, and inside was a bright star. The star leaned in my direction, and I also reached out to it, and almost touched it … And at that moment my brother woke me up. I got so mad at him for that, I almost choked him. After all, I was so close to the innermost knowledge …