The main population of the island of Java. Scattered throughout Indonesia (there are about 95 million) and neighboring countries. Most officially profess Islam, but the syncretic religion Kebatinan is widespread among the population – a mixture of animism, Islam, Buddhism, Hinduism. Even the Javanese calendar is based on syncretism: Islamic and Gregorian chronology.

Javanese is the most spoken language in the country, but is not a state language. Depending on the place of residence, the Javanese worship different spirits: forest, sea, rice. Mountain villagers revere volcanic spirits. There are more than 100 volcanoes in Java, but the tradition is especially noticeable in the central part of the island, in the Merapi region, the most active volcano in Indonesia.

Born in 1995 in the village of Merapi, a few kilometers from the crater of the volcano of the same name. He works as a jeep driver, takes tourists through the mountains and to the crater. Married, two children.

“Merapi has an explosive temper”

I stand and look at the volcano. I can watch for hours. I like to follow his changeable mood. Yes, Merapi has an explosive character, but I admire him.

I have been running to the volcano since childhood. Climb up to the crater. I was 15 years old when the eruption happened, about which all the newspapers later wrote. I dreamed of becoming a builder and helped adults – I collected volcanic stones: they make strong houses.

That day Merapi was hot, a cloud hung over the crater. The usual thing. Every two years there is a weak eruption, once every five to seven years – stronger. A special service under the Indonesian government even installed detectors in the village that react to an excess of volcanic gases in the air. And then suddenly I hear a terrible howl: the siren announced that we must urgently evacuate.

Some, including my family, left . They thought to wait out the eruption and return. But most of the inhabitants remained in the village. The villagers listened to grandfather Maridzhan. Mbah Marijan was the spiritual guardian of Merapi. Hamengkubuwono IX himself, the Sultan of Yogyakarta, appointed him.

Grandfather knew how to negotiate with the spirits of the volcano – Rama and Permadi, passed on their messages to us. He then said: “Are we Javanese or not? Our homeland is a volcano. We stay here.” Some immediately changed their minds about leaving. As a result, Merapi took them all to himself – both grandfather and neighbors. Almost 300 people. Only ruins and skeletons remained from the village.

When the rescuers unearthed the body of Mbaha Marijan in the ashes, it turned out that he froze in a prayer position: on his knees, with his palms folded in a house. So, to the last he tried to persuade the spirits. He's been able to do it before. I remember that in 2006 there was also a powerful eruption. Grandpa convinced everyone to stay at home. Who obeyed, he survived. And two of them arbitrarily hid in the Kaliadem bunker at the foot of the volcano. We built this bunker to hide from the lava if it catches us by surprise. But the air there became hot, and the guys baked in the Kaliadem, as in an oven.

Now, being near the bunker, we definitely go down there and put two cigarettes on the floor. Offerings to the spirits for those two guys. Cigarettes – because the spirits of the volcano love everything fiery, they probably don’t mind smoking. Even the name Merapi can be translated as “the fire of Rama and Permadi”. 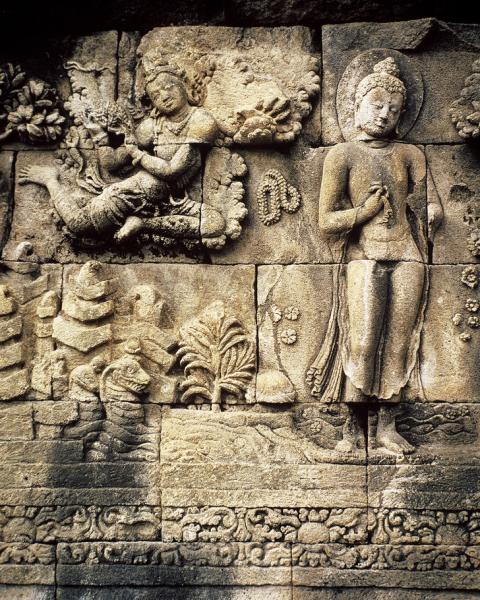 Rama and Permadi were once gunsmiths. At the time of the creation of Java, they argued with the almighty God – Allah, who is more important. They forged a kris – a magic dagger – and stuck it in the ground in the center of the island. But God wanted to move the main volcano Jamurdipo, which stood in the west of Java, to this place: from the point of view of Allah, only in the center of the island would it look harmonious. Seeing the dagger, God got angry, covered the gunsmiths with a volcano and ordered them to rule the underworld. And Jamurdipo has been called Merapi ever since. People say that the underworld is an exact copy of Kraton, the palace of the Sultan in Yogyakarta.

Read also the mouth of an active volcano

Even if the spirits take away our loved ones, we do not grumble. We are nothing compared to a volcano. Javanese are like lava. The volcano created it, so it flows, but where – she does not know. No matter what happens, we always stick together as a whole, and thank the spirits —we arrange kenduri.

Kenduri is a feast of offerings. The one who organizes the celebration prepares the tumpeng dish: boils rice in coconut milk, tints it with turmeric for brightness, sculpts a hill in the form of a volcano, puts this hill on a plate, and puts vegetables and rice around. Calling neighbors. The top is eaten by himself, the rest is divided between everyone. We do tumpeng for any occasion.

A relative died – tumpeng. We bury the deceased on the day of death in a sitting position, because he still has to talk with the spirits. Previously, the body was buried directly in volcanic ash or hidden in a crypt, which was cut down in the mountain. Now we first put them in a coffin, as required by the government.

On the third day after the funeral, we prepare tumpeng again: the flesh of the deceased begins to swell, which means that it will soon decay, and then the soul will be freed. Spirits need to be reminded of this. The next tumpeng is on the 40th day, the most important. The flesh has already decayed, the soul leaves the body.

If a person has been spewing bile and malice all his life, the spirits will not immediately let his soul go to God. And she will fly over the crater. Sometimes the relatives of the deceased on the 40th day dig up the remains and cremate them so that with smoke the soul will surely fly away to the Almighty. Well, if they don’t cremate, then they wait for the 1000th day: we believe that the skeleton sitting in the grave is bent into the position of the fetus by this moment. The life cycle is finally completed. The soul is reunited with God.

“Mistake in science is gaining knowledge”: 11 questions for a volcanologist

“We give away the umbilical cord newborn spirits”

And our life begins even before birth. When a woman is seven months pregnant, we perform the Mithoni ceremony. A man has already formed in the womb, who is still pure and has not had time to anger the spirits. You have to eat tumpeng to make them happy.

A baby is born. He is no longer related to his mother. Now his life is completely at the mercy of the volcano. Therefore, we give the umbilical cord of a newborn to spirits: we bury it in ashes near the house and put a candle or lamp on top – something burning. For 35 days. That is how long one cycle lasts according to our calendar.

There is a generally accepted seven-day week and a five-day Old Javanese week. They run parallel and seem to overlap each other. For example, Monday lay down, Tuesday paing, Wednesday Mon, Thursday Wage, Friday Kliwon, and from Saturday again lie down and so on. After each Old Javanese day falls on each common day in turn, the cycle ends. The child survived his first cycle – we are preparing tumpeng for the glory of the volcano.

1/6Ijen volcano in Java is less active than Merapi

On the 35th day after the birth of the baby, we call all the relatives and come up with a name for him. The tribesmen often name children after the volcano. For example: Mega – “cloud” (female name), Guntur – “thunder” (male). My parents called me Akus – “handsome”. Also in honor of the volcano.

The volcano is beautiful in any weather. When I see him, I feel energized. When you can’t see because of the fog, it remains to recharge your batteries in another way: drink hot tea with ginger and palm sugar – a “volcanic” drink. Like lava gets into the blood. And we grow ginger right in the ashes. This is Merapi's gift.

Burning point: why the inhabitants of Java descend into the volcano crater

“Thanks Merapi – we are working at home”

All we have are the gifts of Merapi. Even our ruined village is a gift. It is no longer possible to live in it, the government moved us to a new place, 10 km from there, but the village is now a place of income for my fellow tribesmen. Museum-memorial in the open air.

One of the neighbors tells tourists about Mbaha Marijan: he was awarded the posthumous title of national hero by the current sultan. Someone shows the power of the volcano: crumpled sewing machines and motorcycles, tattered children's dresses, skeletons of cows. Someone sells bowls and cups made of black petrified lava – souvenirs. And I drive tourists in a jeep to the crater itself. My fee is 300,000 rupees (about $20 in 2018. — Note from Around the World) for a group of two or three people. Very good money.

We need money. But we are not indifferent to where and how to earn them. Thank you Merapi – we work at home. Some Javanese, not settled on the island, leave for Jakarta, the capital. They say it's real life. In my opinion, there is a vent in which you can suffocate. Skyscrapers instead of mountains. Life is here, in the open, by the volcano. Even if he takes her one day. I believe that a Javanese who looked at Merapi until his last breath will immediately go to God. Like grandfather Marijan.

DISTANCE from Moscow to Yogyakarta ~ 9670 km (from 12.5 hours in flight excluding transfers )
TIME ahead of Moscow by 4 hours
VISA Russians do not need
CURRENCY Indonesian Rupiah (1 USD ~ 15 700 IDR)

< em>Material published in the magazine “Around the world” No. 11, November 2018, partially updated in November 2022