Germans are known for their honesty and frugality. It is not surprising that raw meat tartare is loved in Germany: it allows you to save resources and, if the product is of poor quality, immediately gives it away

Scientists are still arguing when a person began to refuse to eat raw food. The dates are different: from 40 thousand to half a million years ago. Perhaps, 790 thousand years separate us from that epochal moment – such is the age of the ancient site of Gesher-Benot-Yaakov near the Jordan River in Israel, where archaeologists found burnt seeds of olives, barley and grapes.

Food, cooked on fire gave our ancestors much more energy. It also tastes sweeter and is easier to chew. But raw food has its advantages: it takes almost no time to cook and it retains more vitamins. 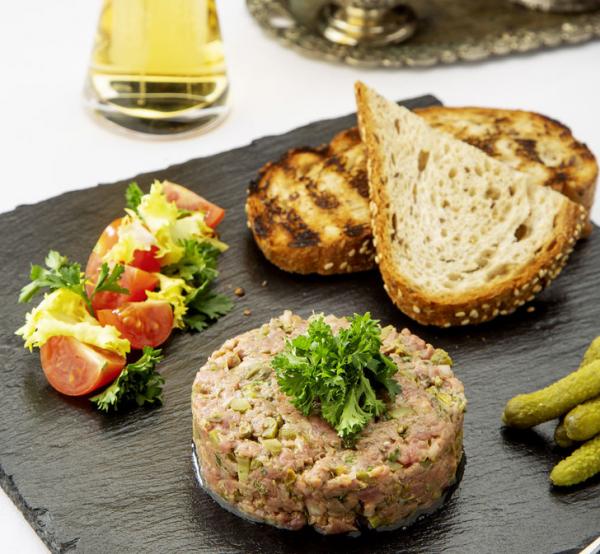 In Germany, raw meat tartare is an everyday dish. According to the classic recipe, it is kneaded from finely chopped chilled beef, adding onions, raw egg yolk, mustard and pickled cucumbers, and served on generous slices of farm bread or with french fries.

Traditionally, the dish was prepared from tenderloin, but now the slogan “Eat the whole cow” is in vogue, and chefs are increasingly using alternative cuts, such as rump, that also have a bright taste.

What makes it safe for Germans to eat raw meat? First, basic hygiene. Bacteria tend to accumulate on the surface of a fresh cut, which, like a slicing knife, needs to be washed well. Secondly, meat these days is usually subjected to short-term freezing to -18 ° C, at which most bacteria die, and only then finely chopped. The final touch: raw onions and spicy mustard disinfect the minced meat once again.

Despite the primitive method of preparation, the Germans have been eating this dish for only a few centuries, and its origin is shrouded in legends.

According to one version, the roots of tartare go to Siberia, which was designated on old maps as Tartaria (Tataria) . Tartar in Greek mythology is the underworld, it was here, in the medieval notion, that wild tribes lived, preferring raw meat. In the northern latitudes, a raw meat dish – stroganina is still common.

There is a version that the Germans were taught to eat tartare by Russian merchants who traded in the port of Hamburg at the end of the 17th century. Here, an honest and understandable dish, immediately giving out substandard ingredients, was loved by both port workers and the upper classes.

Over the years, the recipe, which allowed thrifty Germans, among other things, to save time and fuel for cooking, spread throughout Germany and even at the end of the 19th century went to the New World with German emigrants. If you take apart a well-known hamburger by ingredients, it turns out that this is a heat-treated tartare.

A native of Münster, the chef of the Astoria Hotel (in 2020. — Note by Vokrugsveta.ru) explains why caviar is added to raw meat

How often do you eat tartare in Germany?

Constantly. It is prepared for breakfast, served as an afternoon snack during lunch and in the evening at the bar. My father is a big fan of this dish. When he worked at the factory, it was customary in their team to treat colleagues with tartare on their birthdays. They cut the meat right there at the workplace and laid it out on white Kaiser buns.

What is special about the German recipe?

Usually tartare is made from beef tenderloin, but in Westphalia, where I come from, it is not uncommon to mix pork and beef in half, generously flavoring them with onions. Served on a thick slice of rye bread. By the way, it is no less important element of tartare than meat. The thickness of minced meat and bread should be almost the same. True, now young people prefer not a mixture of pork and beef, but Black Angus gobies.

And what unusual varieties of tartare exist?

For example, surf and turf is a combination of meat and seafood. I cook a similar dish at Astoria. I add black caviar to the chopped beef tenderloin – here there are two different products without heat treatment, sturgeon caviar gives the meat a salty taste. I serve capers, cucumbers, shallots separately so that everyone can add as much as they want.

Meat tartare has a very short shelf life, and you need to eat it immediately after cooking. But there is also a plus that is in demand in the modern world: a reduced calorie content compared to a fried steak.

Thousands of years ago, it was important for people to extract as much energy from food as possible, and in this, thermally processed foods, of course, overtake raw ones. In the modern era, when overeating, calorie surplus and, as a result, obesity have become a global problem, a raw meat dish, the digestion of which requires a lot of energy, is becoming popular not only in Germany, but throughout the world. For example, the Americans and the French love tartar as much as the Germans.

If at home it is prepared simply, then in restaurants, chefs experiment, not holding back their imagination. Crab, smoked eel, and wild berries are added to raw beef; for dressing, in addition to mustard, sour cream or exotic sauce is used. And the word “tartare” itself has become a household name in recent years – this is now the name for dishes made from raw fish and even vegetables.

The main thing is how tartar conquers the modern world, obsessed with the ideas of responsible consumption and in dire in saving all kinds of resources, & nbsp; – the ability not to waste time and energy to get gastronomic pleasure. 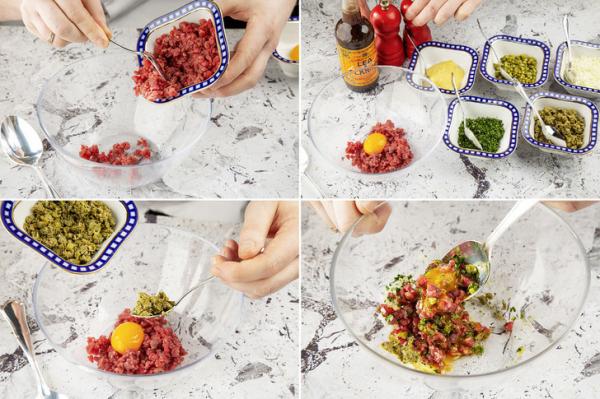 Freeze the beef tenderloin to -18 ° C. Remove from the freezer and hold for an hour at room temperature: the meat should not be very soft. Cut into small cubes.

Separate the yolk from the protein. Put the minced meat in a bowl, add the yolk, vegetables, herbs.

Pour in the Worcestershire sauce, put mustard, salt and pepper. To stir thoroughly. Put on a plate. Serve with slices of bread or French fries.

The material was published in the magazine “Around the World” No. 5 , May 2020, partially updated in October 2022