Zelenogradsk has been the unofficial cat capital of Russia for several years now. Kaliningrad region, where different seals can be found literally at every step. There are monuments to the tailed and fluffy in many other cities of the world.

The sculptural group of heroes “Alice” in Central Park was installed especially for children : you can climb mushrooms, and squeeze cats. There are two of them: on the tree the Cheshire cat, and on Alice lap her favorite Dina.

A two-ton bronze cat, “fat”, like other heroes of the Colombian sculptor Fernando Botero, “wandered” the streets of Barcelona for 15 years in search of a worthy place. In 2003, a big man with a boyish face and pronounced trappings of masculinity found a home on the Rambla del Raval, and the area was chosen by artists, musicians and tourists. The latter rub the animal's nose for good luck, but knowledgeable people say: rubbing is completely different.

The expansion of a ruthless killer: how cats took over the world

According to the popular opinion among St. Petersburg residents, this is a monument to animals that saved besieged Leningrad from an invasion of rats. The cat Vasilisa is walking along the cornice of the house on Malaya Sadovaya, and in the corner of the house opposite Elisha is sitting.

Representatives of a special Turkish breed are often distinguished by a white color and eyes of different colors. Residents of the city of Van -the birthplace of handsome -are so proud of their cats that they have made them a symbol of the city. At the entrance to Van, guests are greeted by a five-meter sculpture of a cat with a kitten.

Seals, dunes and the queen's favorite places: 10 reasons to go to Zelenogradsk

From Samuel Johnson, scientist, poet and critic of the Enlightenment, who compiled explanatory dictionary of the English language in 1755, there was a cat named Hodge. The glory of the owner extended to the cat – poets dedicated poems to him.

A sculpture opposite the Johnson House Museum depicts Hodge sitting on a dictionary. In front of the cat are oyster shells: Johnson fed Hodge oysters. The words of the owner are engraved on the monument: “A truly wonderful cat.” 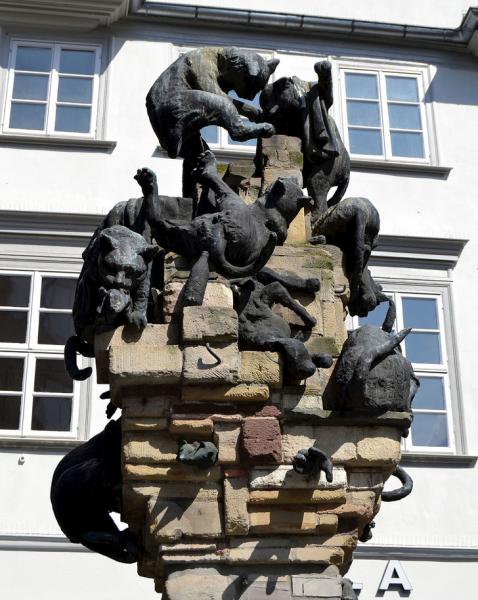 The column with playing and fighting cats is the most extraordinary monument in the city. Passers-by perceive it as a symbol of a peaceful attitude towards stray cats. But the work of the sculptor Siegfried Neuenhausen is not so simple. Many of them are devoted to social and political problems. This one hints at the behavior of people. The name of the sculpture – Katzenbalgen – can be translated as “Cat's fuss”.

The name of the city, according to one version, is translated as “cat” . And there are a lot of sculptures of cats here. The most multi-figured and photographed composition is in the tourist area on a busy square: it is a mother, father and seven kittens. Tourists are happy. 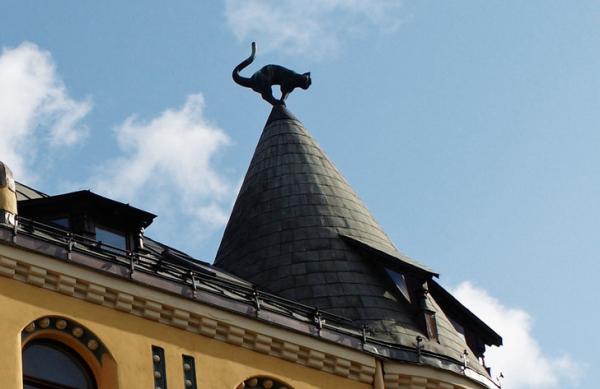 A certain merchant placed black cats on the turrets of his profitable house with their tails towards the windows of the Great Guild building, allegedly in retaliation for the fact that the merchant was not accepted into the guild. Later, the cats were turned around, and today they are one of the symbols of Riga.

The monument at the Pantagruel restaurant was erected to the real Persian cat Panteleimon, who died in a fire in the institution in the late 1990s. According to legend, the cat warned people about the danger.

Material published in the magazine “Around the World” No. 4, April 2016, partially updated in December 2022