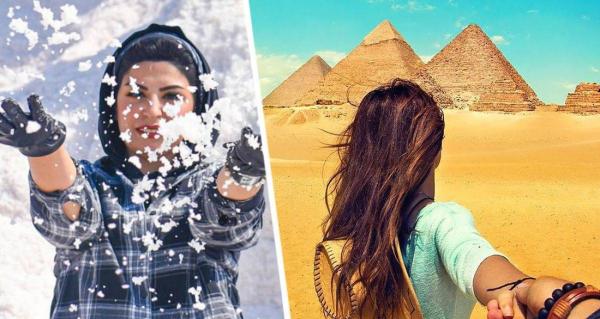 The hot Egyptian winter is actually just a myth that is actively supported by tourists who have never been to this region and are unaware of the deceptive weather in the “land of the pyramids”. As a Russian woman living in Sharm el-Sheikh said, she does not know a single Egyptian who would spend the winter there in slippers, a T-shirt and shorts.

According to her, the locals, who have never seen real snow and live in a sunny country, are very afraid of freezing. At the same time, everyone has their own warm supply of clothes. Sometimes situations resemble a comedy: it is +30°C outside, and the Egyptians wrap themselves in winter clothes. For children, these are demi-season jackets by Russian standards, and for adults, sweaters and hoodies. At the same time, domestic tourists walk around in shorts and T-shirts. With her Russian gaze, the compatriot looks at the locals and understands that in the Egyptian winter, objectively, “children can do without jackets at all, enough sweaters and hoodies”, because. on the street they actively spend time.

On the other hand, warm clothes brought from Russia by a Russian woman are also used. For example, when leaving for Alexandria – a city in Egypt on the Mediterranean Sea, a coat, a down jacket and warm boots come in handy – the north of the country is after all.

The author also spoke about the “coldest moment in my life”, and it happened not in cold Russia, but in Egypt: “It was only here that I fully felt what it means to “freeze to the bone”. It happened on my very first trip, during an excursion to Mount Moses, where we met the dawn. I was there tooth to tooth from the cold, although I was in my “Moscow” December clothes – I had to rent some terrible blanket for a few dollars. At that moment, I didn’t give a damn about his condition – I was ready to wear anything and give any money just to keep warm.

In the country of the pyramids, it is very common to wear warm tops and summer shoes. The Egyptians do not buy warm boots, but can spend the whole winter in sneakers and even slates. For some reason, the feet of the Egyptians do not freeze. The main thing is to have a warm jacket – such an Egyptian fashion in winter.

Winter collections appear in local stores closer to the cold season. It's not just about long sleeves. The ubiquitous T-shirts, airy dresses and tunics give way to coats, ponchos, boots, hats, scarves and even gloves in winter. In winter, the daytime temperature drops to an average of +15°C, and at night it stays above 0°C.

Earlier, Turprom wrote that “Tourists in the resorts of Thailand were warned about impending floods.”

For those who care about a healthy lifestyle, we recommend reading: “The doctor named the 5 best substances to maintain immunity.”