Humanity has long believed that the more important a person or idea, the larger the object depicting him should be

The Egyptians created huge statues pharaohs and deities, the inhabitants of Easter Island – moai figures, the Soviet government – gigantic statues depicting the Motherland, and Emperor Nero ordered a 30-meter statue of himself.

Interestingly, this tradition has not gone away: there are more than 140 statues in the world, the height of which exceeds 30 meters. “Around the World” tells how and why some of the tallest among them appeared.

Memory of political and statesmen

Whether it's the aforementioned Nero statue, the 98-meter high Moscow monument to Peter the Great, or the 37-meter sitting orange Mao Zedong, built in 2016 in a field in the Chinese province of Henan and demolished a few days after the completion of the work – because “it was built without permission” , – a giant statue has traditionally been considered the best way to perpetuate the memory of a major political figure.

Surprisingly, this idea has not become obsolete in the 21st century: in 2018, in India, on the island of Sadhu on the Narmada River in the state of Gujarat, the world's highest 182-meter (240 meters with a pedestal) Statue of Unity, depicting Vallabbhai Patel  — he is called one of the fathers of modern India along with Jawaharlal Nehru. 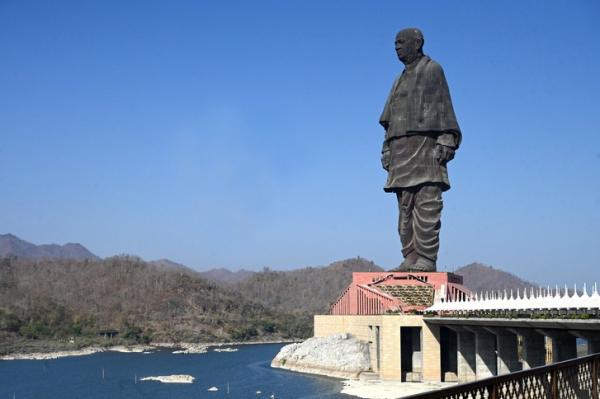 The construction of the statue began in 2013, with the project enjoying huge support from millions of ordinary Indians. The Statue of Unity movement collected old agricultural tools as a source of metal for construction, held marathons, created petitions, and so on. The erection of the monument cost 430 million US dollars. In addition to the statue itself, a whole memorial complex was created, including a garden and a museum; in the future they will be supplemented by a hotel, a conference hall and an amusement park. It is surrounded by an artificial lake with an area of ​​12 km2.

Idol, defend yourself! How and why people destroyed statues and icons

Images of deities and religious figures

“We say ‘giant statue’ – we mean the Colossus of Rhodes (the god Helios) or Jesus Christ in Rio, – this phrase is true when it comes to Western culture. In the East, in particular in India, China and some other countries of Southeast Asia, a giant Buddha or – with a big lag – Guanyin, a character of Chinese, Vietnamese, Korean and Japanese mythology, will come to mind.

< p>Moreover, giant statues began to be erected in this region more than one and a half thousand years ago, and today Buddha images account for the largest number of largest statues in the world —along with the already mentioned Guanyin and other figures of Buddhism, Hinduism and other Eastern religions.

The situation is not new: for 12 centuries, the highest sculpture in the world in the world was the 71-meter statue of the seated Maitreya Buddha carved in the rock near the Chinese city of Leshan, until it was overtaken by the Volgograd “Motherland” with a sword in 1967. And today, in the list of the largest statues, in second place after Vallabbhai Patel is the Buddha of the Spring Temple, a 128-meter figure of Vairochana Buddha, built in 1997-2008. in the village of Zhaocun, in the Chinese province of Henan.

Buddha of the Spring Temple was in first place in terms of height for 10 years. Interestingly, the closest Western religious competitor to this and many other Asian giants is not the 30-meter Christ the Redeemer in Rio mentioned above, but the 47-meter reinforced concrete Virgin Mary, installed ten kilometers from the Venezuelan city of Trujillo.

We put cyclopean figures in this category , not depicting someone specific, but personifying an idea. The construction of such monuments was especially famous for the Soviet government, which, however, tried to build giant monuments to specific people, but we are not talking about them now. 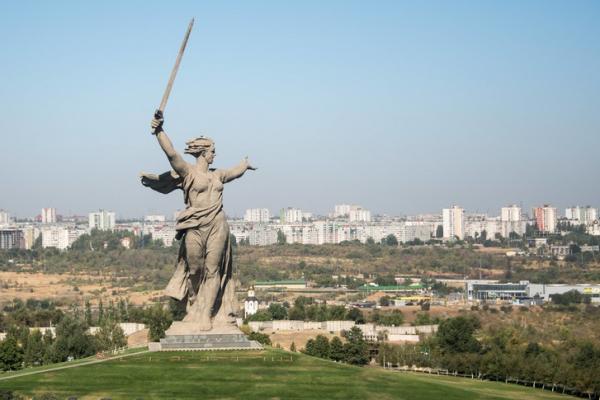 However, the USSR was not a pioneer in the way of perpetuating ideas in the form of statues representing a certain collective image. The most famous building of this kind will, of course, be the Statue of Liberty (46 m; with a pedestal – 93 m), opened in 1886 on Bedloe Island (now – Liberty) in Upper New York Bay. And although, if desired, it can be considered a monument to the ancient Roman goddess Libertas, it is still worth remembering the full name of the structure: “Liberty, bringing enlightenment to the world” (option: “Freedom, illuminating the world”), & nbsp; – and the reason for its construction. It was a gift from France to the United States for the centenary of independence.

Another example of statues of this kind is the 49-meter African Renaissance Monument opened in the capital of Senegal, Dakar, in 2010. It was built for two years, at the height of the economic crisis, in a very poor country from steel and bronze by North Korean workers at the suggestion and at the insistence of the local authoritarian ruler. The construction cost $27 million and caused widespread discontent among local residents.

In 2017, a 110-meter bronze monument was erected to the great navigator in the Puerto Rican city of Arecibo, on the Caribbean coast. The monument is officially called “The Birth of the New World” and is a giant statue of a navigator against the backdrop of sails.

Sound and look familiar? Do not be surprised: the author of the monument is Zurab Tsereteli, the very one whom Muscovites have been thanking for the 98-meter statue of Peter I on the Moscow River for more than 20 years. The monument was actually planned to be built back in 1991 for the 500th anniversary of the first voyage of Columbus across the Atlantic Ocean, but at first they could not find a place for it (several American cities, including Miami and New York, refused the construction at once, because they considered it inappropriate to erect such a large and an aesthetically controversial monument).

Then, when the project was finally taken up in Puerto Rico, it turned out that although Mr. Tsereteli presented the country with a dismantled monument, it would be too expensive to assemble it (it was about at least one and a half million dollars). The construction stopped before it started. In 1998, the structures of the monument (bronze panels of the outer shell and a steel frame) finally reached Central America by sea (at the expense of the host side – this is approximately 2.5 million dollars) and were stored in anticipation of work.

As long as they lay motionless, corrosion did its work. A few years later, it turned out that even if the local authorities suddenly found the necessary funds to assemble the monument, they would need to replace or clean some of the parts. Be that as it may, in January 2013, the construction of the monument itself was completed – it was supposed to be the center of a theme park, the creation of which has not yet been completed.

The Columbus Monument in Arecibo, despite difficult fate, has become, according to local authorities, a tourist attraction. Moreover, he survived without loss the strongest Hurricane Maria in September 2017, which cannot be said about the buildings and infrastructure surrounding him – all this was badly damaged and partially destroyed

It is interesting that the Puerto Rican Columbus is part of a kind of diptych by Zurab Tsereteli: back in 1995, a 45-meter monument “The Birth of a New Man” was built in Seville, Spain. This is also Columbus (in fact, the statue of the navigator has a height of 32 meters), but not on a ship, but in an egg. And it is the largest statue in Spain. By the way, Moscow gave it to Seville.

Will there be more!

Today, China is the leader in the number of giant statues (mostly Buddha), there are at least 35 of them. It is closely followed by India (25) and Japan (19). In the coming years, the number of huge statues in the world will increase. So, in the city of Ayodhya (piece of Uttar Pradesh in northern India), they are actively preparing for the construction of a 251-meter (with a pedestal) statue of Rama, the incarnation of the god Vishnu and the legendary king of Ayodhya, and at the other end of the country, in Mumbai, they want to put 137- meter statue of Equality, depicting the father of the Indian constitution, Bhimrao Ramji Ambedkar (not to be confused with the 66-meter statue of Equality, unveiled in 2019 in Hyderabad and depicting the 11th-century Hindu philosopher and theologian Ramanuja).

China plans to respond with at least three statues over 100 meters high – Laozi, the bodhisattva Manjushri (the legendary associate of Buddha Gautama) and Padmasambhava (an outstanding Buddhist teacher of the 8th century).

Meanwhile, somewhere in the mountains of South Dakota, USA, slowly but faithfully continue to carve an equestrian figure of an Indian leader named Crazy Horse (Crazy Horse) from a whole mountain195 meters wide and 172 meters high. But they do it very, very slowly: since 1948, only a 27-meter-high face has been made.

< p> Why is a monument to the famous leader of the Olgala tribe being created so slowly? Yes because the construction is carried out exclusively on donations, and the scope of work is huge. However, given the growing opposition to the project from the  side of the Indians, who believe that turning a mountain located in  the Black Hills, sacred to them, into a statue is about the same as cutting someone's figure out of mountain Zion on the Holy Land, it is not the fact that the construction will ever be completed.

The material was published in August 2020, partially updated in November 2022