The “Fashion Week” of the luxury travel industry brought together 5,000 industry professionals from 100 countries, with over 4,300 of those 5,000 having attended in person.

Over 180,000 one-to-one networking appointments between advisors and travel companies took place, helping to fuel the great human connection that is the travel industry.

Other highlights included the Under One Sky panel discussion on sustainability, the new Travel Tech Summit, and the Globetrotting sessions that allowed for a more in-depth look at specific brands in a variety of categories like cruising, adventure, wellness, and more. 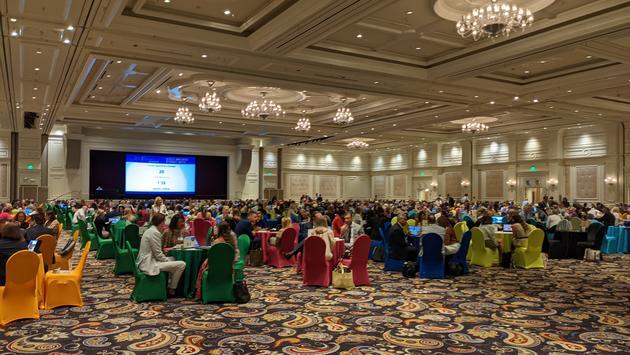 “There were many things that I did not expect, namely with the growth luxury travel has witnessed. [Also] the virtuoso network – outstanding performance. The new initiatives that the network announced and launched, and the commitment from the trade to go the extra mile to leverage the revenge travel they’re witnessing, it’s been very inspiring. I came thinking of recovery, now I’m thinking of exponential growth.”

Some of those initiatives and announcements include the launch of Hospitable Me Training, which will allow members diversity and inclusion training, a redesign to email marketing campaigns for advisors to use, a renewed partnership with Virgin Galactic, and the first-ever global consumer-facing campaign for Virtuoso (exact launch date to be announced later).

Lindsey Epperly, Founder and CEO of Jetset World Travel, noted how valuable it is to be able to reconnect with the industry.

“Virtuoso Travel Week is such an important event for me and for my entire team,” Epperly said. “First of all, it’s a great team-building opportunity, we love coming out here and getting to interact with our team. And then getting to see and re-interact with our favorite suppliers, especially coming out of what this industry has just gone through, I think it’s really important to bring everything other in person.”

To reveal the latest trends in luxury travel, Virtuoso, which generates an average of $25-$30 billion in annual sales, tapped into its vast network that includes 20,000 travel advisors from around the world – all of whom advise affluent and high-net-worth clients – as well as their preferred relationships with more than 2,200 of the world’s best hotels and resorts, cruise lines, airlines, tour companies and top global destinations.

Outbound leisure travel sales have rebounded strongly for Virtuoso. The U.S. has already outperformed 2019 numbers for 2022 by 122 percent, Australia by 113 percent while Canada, at 80 percent, is still playing catch up. “Globally, we have surpassed 2019 for outbound travel booked January-July at 102%”, Virtuoso said.

76 percent of travelers have accepted a “new normal” and only 12 percent say there is still too much uncertainty and volatility.

Will this strong bounce back maintain?

“Maybe this immediate pent-up demand will slow but I do think that the lifestyle of travel and the concept that we’ve all learned from the pandemic that we have one life to live, if you wanna take the trip, now is the time to take it – I think that is going to remain and I think that that’s across generations,” said Beth Washington, Founder at Getaway Guild.
“I think it’s well documented particularly you know with the millennial generation and younger, travel is an important part of their lifestyle. It’s something they’re not willing to give up, it’s something they’re willing to spend money on before they spend money on other luxury goods or other lifestyle purchases, so I definitely think the high demand for travel is the normal.”

20 percent of millionaire households in the United States belong to the millennials. Those who have the means to travel are willing to spend it.

74 percent of all Virtuoso travelers who responded to the survey said creating a travel experience that best fits their expectations is more important than price. Virtuoso data shows their travelers have plans to increase their previous year’s spend of $20,700 per person by 34 percent to $27,800 in the next year.

2023 looks to be “record-breaking good,” said David Kolner, Senior Vice President of Strategy at Virtuoso. Travel sales in 2023 are pacing 47 percent higher than 2019 for Virtuoso.

Globally, the travel industry is not expected to fully recover until 2024, but luxury travel in key markets continues to push forward with big numbers.

Across all countries, hotel and on-site leisure booking volume is at 157 percent of 2019 levels.

Traveling with a spouse/significant other is the most popular form of travel, followed by traveling with friends in second and family trips with kids under 18 in third.

“What’s trending in luxury travel for our agency is probably what we’re seeing across the board right, like so much Europe this summer [and] traditionally for our agency we book a lot of Caribbean, but also just the type of travel,” Epperly said. “We’re seeing our travelers still slowing down just a bit compared to 2019 in terms of like how fast their pacing is on their trips – they’re still very much American travelers and ‘go go go’ is normal, but we’re seeing multi-gen as well. I think families really wanna come together and be together, that’s a big trend.”

Solo travel is also on the rise, with the highest level of interest coming from the 65+ age group. 78 percent of travelers say they’re ready to travel now. For 87 percent of those polled, the dollar’s parity with the Euro plays a factor, and only 35 percent say that this summer’s air travel complications have caused them to cancel or postpone plans.

Virtuoso also revealed where their travelers were going the most. The top summer destinations are the United States first, Italy second, France third, Canada fourth, and Greece in fifth. The United Kingdom, Spain, Mexico, Ireland, and Switzerland round out the top 10. 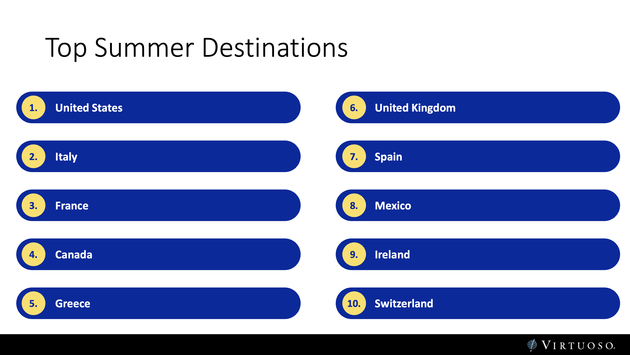 Looking Ahead to the Fall and Holiday Seasons

Hotel bookings for fall and festive travel (September 1 to January 15) made through July of this year are at 173 percent of where they were at the same point in 2019.

The U.S., Italy, France, Mexico, and Canada are among the top international destinations for September-December 2022.

This holiday season, 71 percent of Virtuoso travelers will travel for vacation, while 21 percent will travel to see family and friends.

Islands and beaches top travelers’ lists for holiday travel, followed by trips with a wellness component, an ocean cruise, and cities outside the U.S. Of those surveyed, 62 percent will travel to multiple destinations with 38 percent saying they will travel to just one single destination. Also, wellness-focused trips were the only category to see a year-over-year increase from 13 percent in 2021 to 24 percent in 2022.

“If you’re not planning it, you better plan now,” Upchurch said. “It’s almost too late. I mean, that’s one of my main messages is [to] plan ahead. A lot of our best travelers have started something that’s only picked up, which is they’re thinking longer in advance. A lot of our more sophisticated travelers, what they’re doing is that they’re thinking about their big milestone trips right, two to three years in advance or more. We’re finding that the travelers that have a more conscious plan are actually able to have better overall experiences and take advantage of last-minute stuff because it’s in the context of a larger plan.”